The 1964 Tokyo Olympics heralded a new life, a phoenix rising from the ashes of World War II. Japan was eager to show the world its resilience, and the games were part of a boom that has created one of the strongest economies in the world.

But the economic surge that launched itself in the aftermath of the 1964 games took a toll on the country’s water, effects still felt today. The construction for the games covered rivers, canals and bits of sea, restricting or destroying much of the city’s navigable waterways, and drying up a prized seaweed field that had been harvested for 300 years. Sludge, algae and toxic water resulted.

Now, 2020 will see another Tokyo Olympics, and the organizers of next year’s games have already launched several sustainability initiatives. Japan is a different country than it was 55 years ago, but signs exist that poor water quality may again raise its ugly head. Compounding the environmental toll that every Olympic Games puts on the host country is the fact that climate change makes these calculations more exacting.

Summers in Japan are already prone to extreme heat. Late July is typically hot and humid, with average temperatures hovering around 90 degrees Fahrenheit. In fact, even in 1964, organizers pushed the Tokyo games back to October for this reason (next year’s games start in late July).

Higher temperatures mean more stress on both water quality and quantity. Water quality is already causing some heartburn for organizers. In October 2017, E. coli levels at the spring canoe and rowing venue was 20 times the acceptable limit set by Olympic guidelines. Organizers subsequently added underwater screens, which have significantly reduced the bacteria levels, but other venues are still struggling to meet requirements.

In addition, Odaiba Seaside Park, the venue for swimming and the triathlon, failed a water quality test in October 2018. These problems have solutions, but they significantly increase costs, which typically strain budgets under the best of circumstances. The International Olympic Committee’s vice president, John Coates, urged the Japanese organizers to reduce costs by over $1 billion—the costs having almost doubled from the initial proposal. 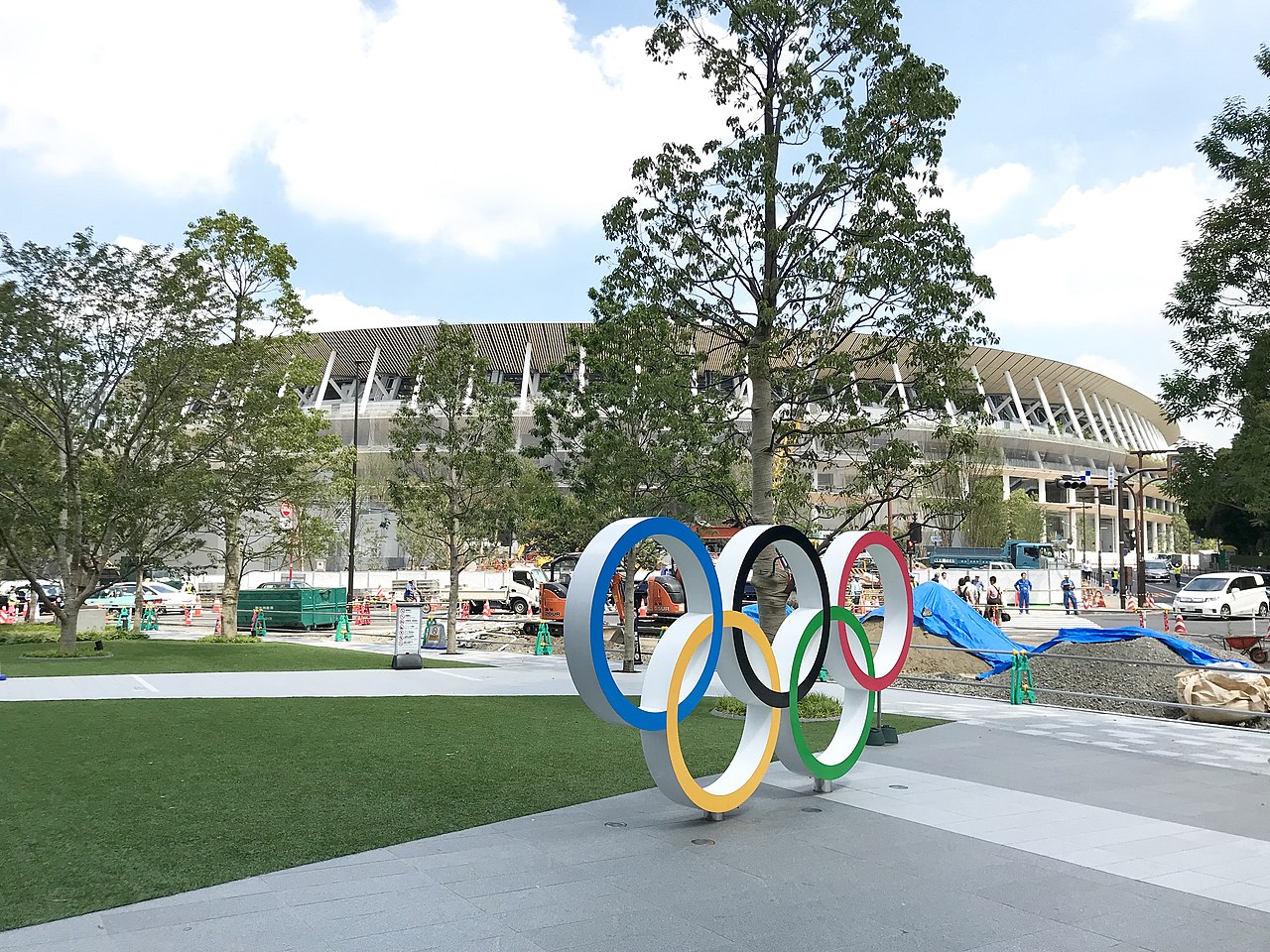 (Image: New National Stadium, site of the Tokyo Olympics opening and closing ceremonies, as well as track and field competitions.)

In 2016, Rio de Janeiro faced a bevy of problems, including several water-related obstacles when it hosted the Summer Olympics. One of the venues for sailing and windsurfing, Guanabara Bay, was so polluted that some countries debated whether they should even allow their athletes near the body of water. In the end, the events took place with athletes taking precautions, such as hepatitis vaccinations and antimicrobial suits.

Japan is in a different boat economically from Brazil, and there should be no excuses about water quality. Water quantity provides another obstacle. Prior to the 1964 games, Japan suffered an “Olympic drought” and had to source emergency water supplies. No such drought threatens next year’s games, but fear of drought raised its head earlier this summer when rains were late to arrive. The bigger threat for Japan under climate change, however, is an excess of water. Predictions of increased catastrophic floods linger over the country.

Water is just one component of environmental impact to consider. Olympic Games had historically been about gold, silver and bronze—not green. Even the “greenest” Olympics, held in London in 2012, used almost 400 temporary generators, which had their own emissions impact during the Games. With the advance of climate change, the impacts of the games on host countries could become more pronounced. At times, renewed calls come for permanent games sites, which could reduce both the overall costs and the environmental stress that comes from construction of facilities. In addition to the monetary costs of putting on games, the environmental costs can be even more staggering.

The reality is, when the environment is separated from economics and public health, hidden costs mount quickly. Connecting the dots is necessary. Environmental costs could be incorporated into projected costs during the bidding process. We must create a future in which countries are able to undertake ambitious projects like the Olympics and still protect their people, natural resources, and fiscal health. Gold medals may not be at stake, but a prosperous future is.

The sustainability concept for the Tokyo 2020 Games is: “Be better, together—for the planet and the people.” If next year’s Olympics truly live up to that ideal, we could see a future where future host cities are better off, with not only an enhanced global reputation, but also better infrastructure including facilities that citizens can enjoy for the long term.