As the United States observes Veterans Day with parades, ceremonies and office closures, New York University's Tandon School of Engineering is looking to support veterans all year round.

Despite gaining a host of technical and leadership skills through military service, Iraq and Afghanistan veterans face consistently higher unemployment rates compared to civilians. Around half of former service members say they struggled to find work in their desired field after leaving the military, according to a 2018 survey from Edelman, which itself was founded by a World War II vet. And more than 40 percent of employed veterans feel their employers don't take full advantage of their skills and experience—a higher percentage than any other demographic by at least five points, the survey revealed.

Edelman's research, as well as others', indicates that American companies still have a hard time understanding veterans, the unique skills they bring to the table, and the unique challenges they face. As with other groups that find success elusive through traditional employment avenues, entrepreneurship provides a path for veterans to put their skills to work and take command of their futures upon re-entering civilian life.

After serving veterans through various programs over the years, NYU Tandon took its programming to the next level with the opening of the Veterans Future Lab, a startup incubator dedicated entirely to veterans and military spouses.

With funding from Barclays and the state of New York, the Lab's four-person team of mentors hope to address veterans' specific needs as they work to build their companies. "When you serve in the military, there are certain sacrifices you make and certain things you give up that you can’t get back," said James Hendon, director of the Veterans Future Lab.

Inside the Veterans Future Lab

Opened last year, the Veterans Future Lab spans 3,800 square feet of office and prototyping space. Participants in the incubator's Apex program receive free space for a year and full access to NYU's resources—including faculty mentorships, networking connections and tailored support based on each startup's needs. The 3-D printers, laser cutters and other machinery in the Lab's prototyping space are free for Apex cohorts and also available to the public via membership.

Additionally, the incubator hosts the Veterans Entrepreneurship Training (VET) program, a free 12- to 14-week course for active-duty service members, veterans and military spouses, which Hendon himself participated in back in 2016.

"This is the only incubator of its kind in the country, as far as a high-touch incubator for U.S. military veterans and spouses," Hendon told 3p. "We're not asking for equity. We just ask you to be fully committed to your venture and that there be an actual market for it." 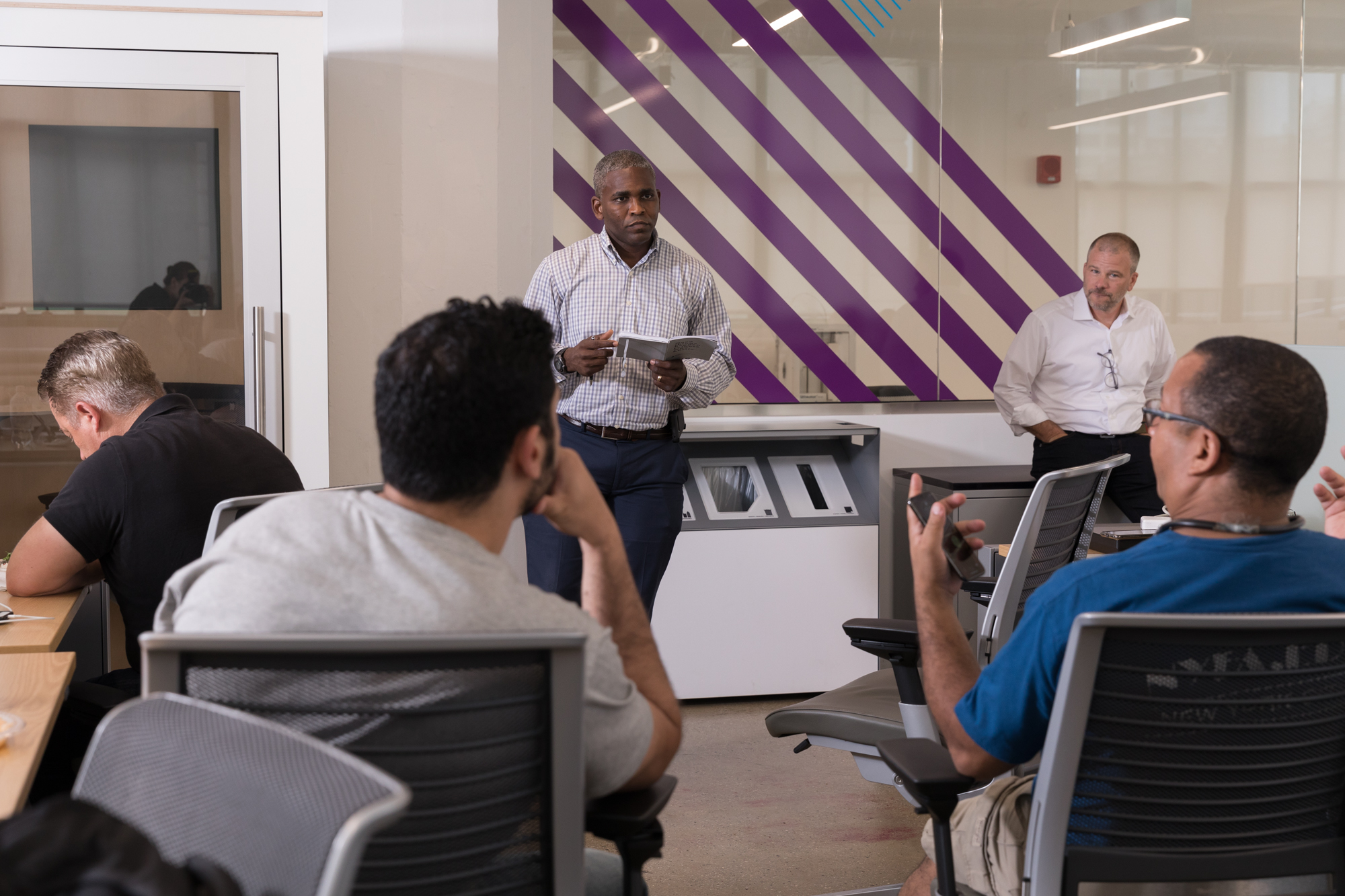 Hendon knows what it’s like to transition from military service to entrepreneurship, because he did it himself. Born and raised in Miami, Hendon entered West Point after high school and received a commission as an infantry officer upon graduation. "I'm always attracted to the harder thing," he told TriplePundit. "West Point and the idea of even being in the military terrified me, so I went toward it."

After seven years in active duty, serving in Iraq and Afghanistan and later as an admissions officer at West Point, Hendon felt it was time for a change. "I enjoyed the military," he said. "I still do, but I was looking for the next big challenge." He attended graduate school with funding from the Post-9/11 GI Bill, served as COO of the clean-energy startup Bloc Power, and ultimately went on to found his own clean-energy business.

Like Hendon, veteran entrepreneurs often extend their passion for service into their new ventures. "They trend toward things that are impact-driven and have a double or triple bottom line," Hendon told us. While other Future Lab incubators are sector-specific, the Veterans Future Lab is open to all veterans and spouses. Its first cohort of 20 companies span all industries—from tech platforms geared toward social investing, renewable energy and professional feedback, to a nonprofit serving veterans and a veteran-run business association.

The founders in the cohort are as diverse as their ventures, and indeed as the military itself—necessitating a tailored approach that meets founders where they are, Hendon said. "The companies are so different, and they have such different needs. That diversity is rooted in what the military is," he explained. "We call our program Apex, because it's all about the delta between who you were when you came in and how we're able to help you be further than you would have been once you leave."

The first cohort, who will graduate in April, range in age from 25 to 56. Four out of the 20 founders are women, a percentage Hendon hopes to grow in the next class. "It’s important for us to have gender parity," he said. "We want to gather different minds in the room."

When it comes to recognizing veterans as a founder population, "there's still more work to be done."

While many banks, investment groups and other financial companies have philanthropy programs geared toward veterans, these efforts don't necessarily translate into support for veteran-founded companies. "There's more work to be done in that area," Hendon said. "We are in an environment where people like to give lip service to being a value to veterans, but not as many folks will put their money where their mouths are as far as supporting veteran-related ventures."

Beyond access to seed capital, many veteran entrepreneurs also lack the connections they need to build their businesses, Hendon said. "We don't have as many veteran founders as I'd love for us to have because you've got folks who don't have the same Rolodex as someone who may come from a different type of background," he explained. "The investment community, whether they realize it or not, happens to support folks who come from certain pedigrees and already have certain advantages. This is a blind spot, and I hope we can cast a light on it where we are."

Nearly half of all World War II veterans went on to own or operate their own companies, according to Syracuse University’s Institute for Veterans and Military Families. Yet less than 5 percent of America's more than 3.6 million post-9/11 veterans are business owners. Dedicated support systems like the Veterans Future Lab can help bring those numbers back in balance—not only through mentorship, connections and access to capital, but also by providing a co-working space where veteran entrepreneurs can learn from one another.

"Everyone who we're targeting has made a sacrifice," Hendon told us. "There’s a gap between where they are and where they would be if they had not made the decision to serve—be it as a family member or as a service member. We want to try to address that."

The Veterans Future Lab is accepting applications for its 2019 cohort, which will go beyond the New York City metro and welcome veteran founders from across the country. You can apply here.

More Investment is Needed for For Sustainable Aviation To Take Off