After the Business Roundtable Purpose Statement, a Long Road Ahead

The Business Roundtable, the U.S.’s most influential group of corporate leaders, devised its original statement on the purpose of a corporation in 1997. It was based on the principle that management and directors’ main duty was to maximize profits for the shareholders, who would then decide what to do with those profits.

After recently revisiting the statement, however, the Roundtable has now reenvisioned the relationship between an organization and the world around it. The statement now proposes that a company has a broader responsibility to society that requires it to consider all stakeholders in its business decisions. Noble intentions indeed.

The updated statement of purpose, agreed on by nearly 200 CEOs, is a worthwhile initiative; it acknowledges, from the very top of mainstream business, that there is more to business than profit. It expands a company’s raison-d’etre to non-financial considerations. But as many leaders have noted, more work needs to be done.

From our point of view, there are three buts.

One may assume that it makes a difference having leadership that’s committed to the statement of purpose. But is this actually the case? We used Datamaran to conduct an analysis of the topics discussed in the purpose statement of signatories' annual disclosure over the last five years.

The graphic below shows the level of emphasis* Business Roundtable and S&P 500 companies have put on specific topics in their annual financial reports, sustainability reports and SEC filings over the last five years. We’ve found that there isn’t any drastic difference between the disclosure patterns of companies who have signed up, and those who haven’t. 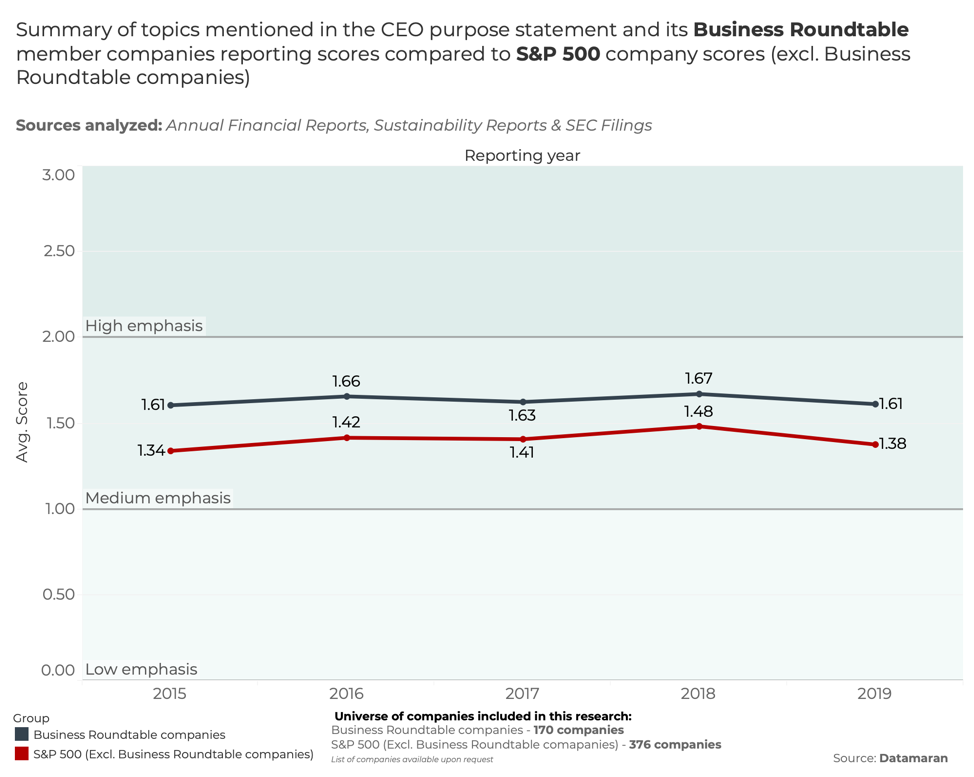 Business Roundtable companies aren't more “committed” to deliver on the purpose statement than the S&P 500, based on their actions so far. One may argue it's early days as the statement has just been made, but we are yet to see any action. You can be part of the initiative, but if you don’t perform the right actions to support it, you’re no different to those who aren’t part of the initiative.

The issues Business Roundtable CEOs indicate are very ‘social’ in nature. The environmental action component seems to be largely omitted from the statements, which makes the purpose incomplete and biased. We support the drive, but other elements of value creation should be included too, and viewed holistically to see how companies have the greatest net impact.

It’s great that the Business Roundtable is trying to take the lead and identify ways companies create value, but there should be a more holistic way of recognition – multiple capitals. It’s in the broader framework and we can measure it.

I am still not convinced non-financials are taken seriously. One good way of confirming that a company is committed beyond profit is to have its non-financial disclosure assured. Sadly though, this is by no means a given: our data tells us that in 2019, 71 companies have published a sustainability report, with 32 being assured (45%). Last year, 40 of 106 published sustainability reports were assured (38%). There was next to no movement in the previous three years, with the figures standing at 42% in 2017, 42% in 2016 and 43% in 2015. Sustainability disclosure has started heading in the right direction this year, but there’s still a lot to do.

Grand statements certainly have their place. They help you to articulate noble intentions and communicate your stance to the world. They allow you to create fellowship with likeminded people and work together to make a difference. That is the opportunity now presented to nearly 200 CEOs.

Obviously, this isn’t the first such statement committed to paper. What makes the statement of purpose different to the SDGs (Sustainable Development Goals) for example? How do these various statements of good intent relate to each other? Is commitment to one particular framework (or different parts of different frameworks) more credible than commitment to another?

CEOs will need to be clear on who precisely will take responsibility for the statement of purpose: whether it’ll be the sole domain of the C-suite or whether the shareholders, financial institutions or other groups are able to commit.

The statement of purpose is a step in the right direction, but ultimately, talk is cheap. If they really do believe that their businesses are about more than just profits, now is the time for some CEOs to start putting their money where they mouth is.

* Emphasis: ‘High,’ ‘medium,’ ‘low’ and ‘no mention’ are the emphasis scores that are used to assess the level of emphasis each company puts on a specific topic in their corporate reports. The emphasis takes into account a number of variables, including but not limited to the number of times the topic is mentioned, its location (e.g. CEO letter) and more. For example, high emphasis topics are found a large number of times in a source and/or in key sections. Whereas low emphasis topics appear only rarely in a source.

Marjella Alma is the CEO and co-founder of Datamaran. Marjella believes that the application of artificial intelligence (AI) to corporate sustainability is a game-changer, and partnered with a former Wall Street trader and big data expert to drive her vision into reality.