(Image: The Girls Leadership Academy of Wilmington (GLOW), an all-girls charter school that's out to close the STEM gender gap with a focus on "whole girl" education.)

The recent 50th anniversary of the Apollo moon landing meant the resurrection of images depicting NASA’s anxious mission-control analysts, almost all of whom were white males, sporting white shirts, black ties and crewcuts. As far as 1969 viewers were concerned, rocket scientist was a job for men with bad haircuts.

Jump ahead half a century, and notions have changed about who can be a mathematician or a scientist—and the number of women and minorities in those fields has increased. At the same time, old perceptions persist: Over the past 20 years, studies have shown that when asked to draw a scientist, girls drew men more than twice as often as they drew women, and boys almost always sketched men.

While girls’ lack of participation in science, technology, engineering and mathematics (STEM) courses was once dismissed as a lack of interest or ability, research shows girls are just as capable as boys when it comes to higher-level math and science. Female high-school and college students, for example, fare as well as males in math and science courses, although males tend to score higher on the math portion of the SAT. But in the end, only 6.7 percent of women earn a college degree in a STEM field, versus 17 percent of men. When it comes to minority women, the figures are even lower: From 2015 to 2016, only 2.9 percent of all STEM degrees were earned by African-American women and 3.8 percent by Latinas.

Fueled by recent studies and real-life successes, some stakeholders are embracing single-sex schools as the best way to close the persistent gender gap in math and science fields. The leaders of the Girls Leadership Academy of Wilmington (GLOW), an all-girls public charter school in Wilmington, North Carolina, for example, are hopeful that this model will not only be life-changing for low-income, struggling students, but also benefit society at large. 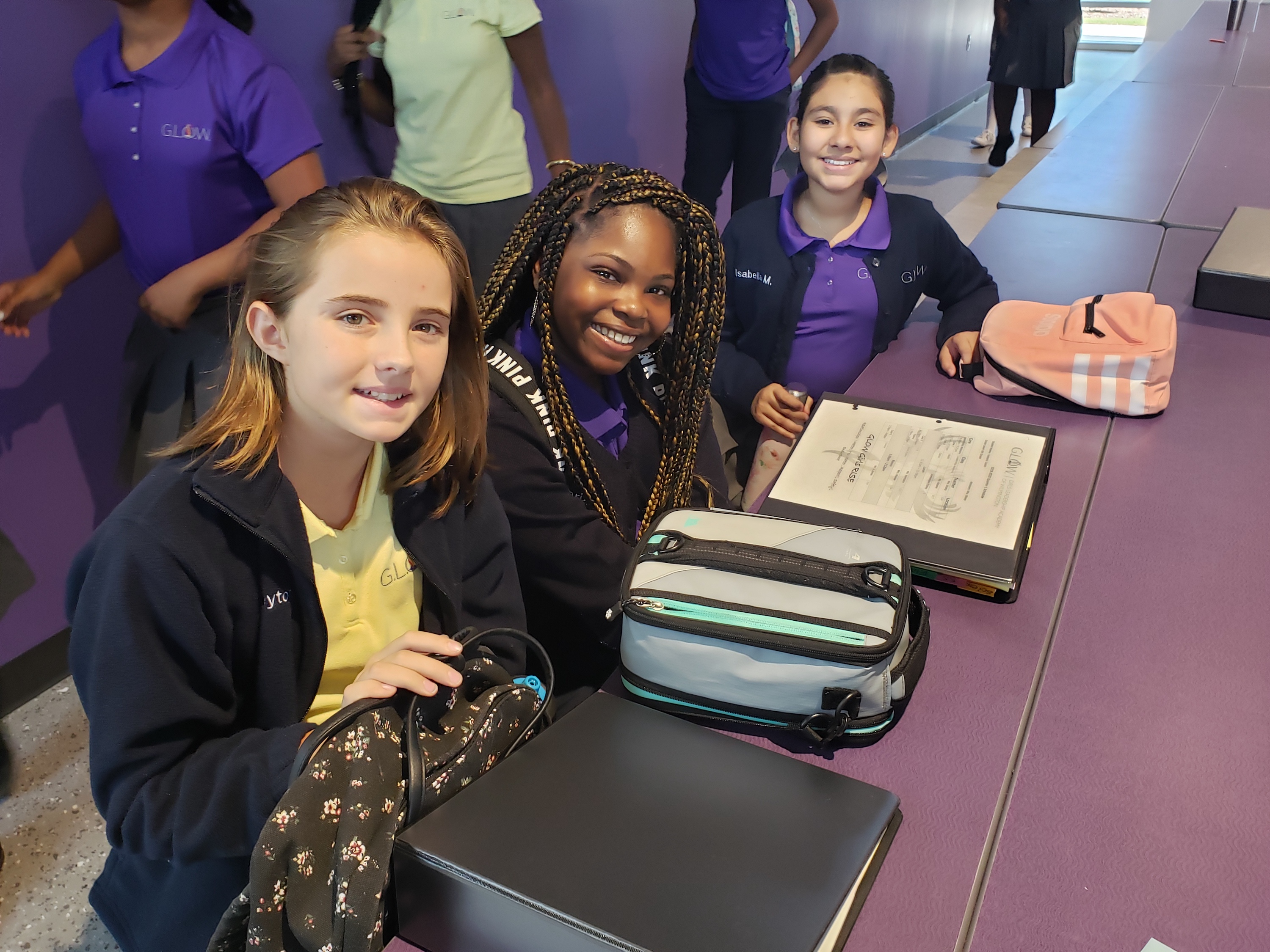 (Image: Students at the Girls Leadership Academy of Wilmington.)

GLOW: All-girls education focused on STEM, empowerment and the arts

The school starts its third year this month in a new building, with students in sixth-through-ninth grades. One hundred new students, selected by lottery, are enrolling every year until the school is fully populated with sixth-through-12th graders.

GLOW focuses on STEAM (STEM plus the arts), offering rigorous academics and an education model designed to help girls develop confidence, positive self-images, and leadership skills on their way to earning a high-school diploma and enrolling in college, the school’s leaders say.

Just getting students into college, though, is not GLOW’s end goal. The school’s long-term mission is to produce college graduates who transition confidently into society.

“We have set out to create a system so students can develop academic and thought skills to navigate into middle-class America,” says GLOW Principal Laura Hunter. “It takes time, it takes resources, and it takes intentionality that is outside the norm. High-school graduation is not the finish line for us—it’s the beginning. Our finish is happy, healthy adults who are engaged in their communities.”

And GLOW’s staff members are convinced that empowering girls can ultimately push future families up the economic ladder. “The reality of poverty is that it lies most heavily on the shoulders of women and children,” Hunter says. “We have to work with women to claim financial independence in adulthood and build stronger, more resilient family structures that move toward the accumulation of wealth.”

U.S. women are 35 percent more likely to live in poverty than men, with single mothers particularly affected. More than one-third of single mothers are considered poor, according to Legal Momentum, an advocacy group for women and girls in the U.S.

Single-sex education: A solution for the STEM gender gap?

GLOW is part of the Young Women’s Leadership Network, a group of all-girls schools founded in New York in 1996. “It was very evident that what was being done by the leadership network was the leading model for girls in closing the achievement gap and persisting through high school and graduating from college,” says Todd Godbey, GLOW Academy CEO.

Part of that is due to removing the ultimate distraction, the opposite sex. Studies show that girls in single-sex schools are less concerned about appearance, dating and sexuality, and they report more confidence in their science, computer and math skills without boys in the classroom. Low-income students in single-sex schools also score higher on standardized tests in mathematics, reading, science and civics, compared to those in co-ed schools.

Building girls’ STEM skills can also be easier in single-sex schools, where girls are not as self-conscious. “We have a number of girls reporting that their favorite subject is math or science, but after middle school, they no longer have confidence in math and science,” Hunter says. “So the first step is keeping that love alive in middle school. That takes confidence-building, ways to do hands-on math and science, and field trips. Over time, we provide lots of experiences in building those skills. [For example], we have a lab entirely focused on problem-solving involved with engineering.” 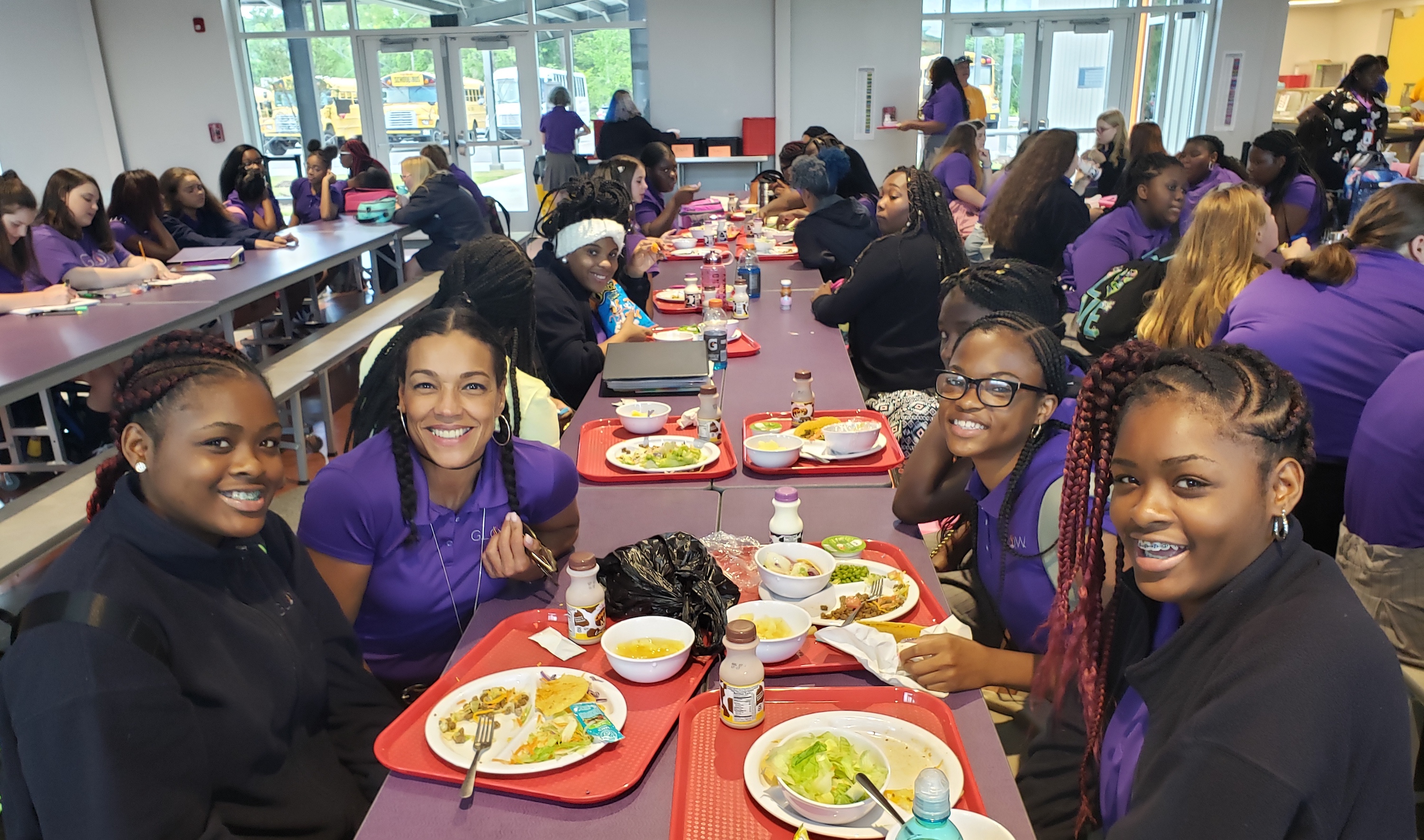 (Image: GLOW students sit down for lunch on the first day of the 2019 school year.)

Supporting girls for a successful future

Many GLOW students enter with additional challenges on top of the usual teen angst. Ninety-percent of students are from low-income families; 55 percent are African-American, 18 percent Latina, and 35 percent white or mixed race. Most of the students are one or more years behind academically, and many have troubled home lives, so the school provides extensive support services for students and families.

Despite those challenges, many students have shown gains in reading over the two years they’ve spent at GLOW, though math scores are improving more slowly. “The process of catching students up to grade level takes time,” Godbey explains. “We don’t ask what is wrong with a child; we ask what has happened to that child. We have a lot of student support staff, and we are committed to ‘whole-girl' education. We have to find out what’s causing the trauma and work with the family.”

Instilling more skills that match workforce demand is another GLOW mission. “GLOW is attempting to look at the community and the job sector around us, listen to what they need, and provide kids with those skills,” Hunter notes. “[These are the ability to] collaborate, write, advocate, meet deadlines and manage time, all things the modern workforce needs. We intentionally teach students how to participate in collaborative groups, project management and group discussions. We also encourage them to fail on their way to a goal. We have to make those opportunities available for them to develop those skills.”

With so much to manage, the support and knowledge that GLOW receives from other schools in the leadership network have been critical to its development as a school and a potential resource for others. “We learn from each other every day,” Godbey says. “We get together several times a year to share ideas, best practices, issues and lessons learned. We usually take more than we give at this point because we are a younger affiliate.”

GLOW administrators have also provided advice to other schools starting up. “Even though we are relatively new, we are actively helping the next generation,” Godbey told us.

As it builds its new model, GLOW’s leadership also recognizes a responsibility to promote successful strategies to the larger education community. “It is our job to be potential incubators of innovative ideas, and the next step is to share those,” Godbey notes. “We have clear indicators that things are going well, but we are not at the share stage yet.”

Images courtesy of the Girls Leadership Academy of Wilmington (GLOW)