As the largest hotel on the West Coast, the Hilton San Francisco prepares well over 1 million meals for guests and conference attendees every year. That's a whole lot of chicken marsala, cesar salad and vodka rigatoni. Unfortunately, a significant percentage of the food it purchases and prepares goes to waste due to inefficient use, poor storage and stock management, and customer plate waste.

For hotels such as Hilton, throwing away food presents serious financial, environmental and social concerns.

According to the U.S. Food and Drug Administration, between 30 and 40 percent of the nation’s food supply goes to waste. This adds up to 133 billion pounds or $161 billion worth of food. Experts say an estimated 40 percent of the total comes from consumer-facing business, including restaurants and hotels. What’s more, the World Wildlife Fund (WWF) predicts that about 11 percent of global greenhouse gas emissions could be eliminated if food waste were brought to zero.

Following a pilot at 50 hotels, including in San Francisco, Hilton will expand its food waste reduction program to all North American properties, the company announced this month.

Hilton says the move is part of a strategy to halve food waste in its hotels by 2030. Its program is based in part on the WWF and American Hotel and Lodging Association’s Hotel Kitchen Toolkit, which provides resources to help hotels use food wisely and dispose of leftovers in a sustainable way.

For Hilton, the pilots resulted in a number of innovations, the company said, from “no-waste” catering menus to thoughtfully designed buffet presentations. The pilots also illustrated that producing less food requires an integrated approach involving hotel management, catering, purchasing, services and events, but can help to streamline menu planning and reduce over-production.

In terms of numbers: Pilot hotels in the Americas diverted more than 6 million pounds of food waste from landfills in 2019, an equivalent of more than 11,000 megatons of carbon emissions, according to Hilton. The Hilton San Francisco, for example, reduced food waste by purchasing locally-sourced and in-season products, working with “imperfect produce” sources, and using the whole product wherever possible.

Following the guidance of the Hotel Kitchen Toolkit, the company donates any remaining viable food to local shelters and agencies. For any food that cannot be donated, Hilton composts it, saving approximately $7,000 per month in waste hauling fees, the company says. 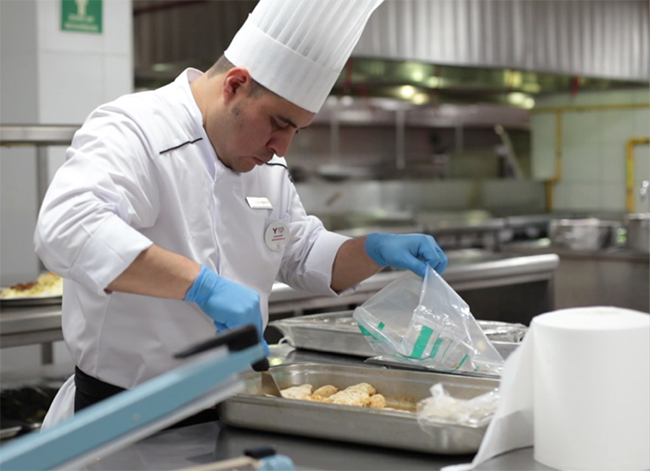 (Image: Hilton plans to scale food rescue and donation alongside its efforts to reduce food waste.)

By donating surplus food, Hilton is also tackling food insecurity in the United States, which effects an estimated 41 million Americans, including 13 million children.

Through the expanded program, each Hilton hotel in North America will be expected to set a food waste diversion and donation goal for 2020 and report their progress. Hotel management can select organizations to work with from a directory of food donation and diversion partners from across the country, as well as connect with one another to share best practices.

With additional local donation initiatives in place once the program is fully rolled out, Hilton expects to donate nearly 100 tons of food in 2020, enough to feed nearly 160,000 people.

This builds on existing food donation partnerships. The Hilton San Francisco provides nearly 2.5 tons of food to Food Runners annually. The Waldorf Astoria Las Vegas donated nearly a ton of food to Three Square over the past year. And the New York Hilton Midtown donates regularly to the Rethink Food Program. Hilton says it plans to expand its donation efforts globally in the future.

Hilton is not alone

A number of other hotels are also rolling out the Hotel Kitchen Toolkit—and seeing results.

Marriott, the largest hotel company in the world, tested the Toolkit at 10 of its properties and is now rolling it out globally as part of its goal to halve food waste by 2025.

Speaking at Bloomberg’s second annual The Year Ahead: Luxury summit last month, Denise Naguib, vice president of sustainability and supplier diversity for the hotel giant, confirmed that food waste will be a major focus of its environmental strategy in 2020. “If we are going to tackle major issues against climate change, we need to tackle food waste,” she said.

Hyatt is also launching the Toolkit at its 875 hotels around the world, with each required to put in place a food waste management plan in support of the company’s goal to reduce food waste by 40 percent by the end of next year. Already, the hotel has seen a 50 percent increase in the number of hotels reporting donation of excess food, and it is testing an app that facilitates selling surplus food at a discount toward the end of a meal period.

Hyatt also found that simple adjustments can yield big results. Through its participation in the initial pilot, the Hyatt Regency Orlando reduced food waste at buffets by introducing cylinders and dispensers to control portion sizes, decreasing serving dish sizes, and using buffet servers with adjustable tray heights that give the impression of always being full.

In the pilot phase alone, participating hotels saw at least a 3 percent reduction in food costs while using the Toolkit, and more than 90 percent of hotel staff surveyed said they want to take action to reduce food waste, according to WWF and the Association.

From a total waste perspective, participating hotels reduced food waste by 10  to 38 percent in the first 12 weeks. If scaled across the industry, experts predict the Toolkit could eliminate half a million tons of waste within a year.

Now that’s a lot of fettuccini alfredo and tiramisu.