Those soaking up arts and culture during Miami Art Week and Art Basel will get an up-close look at the state of plastic pollution in our oceans.

At the pop-up Museum of Plastic in Miami Beach, guests are invited to explore an interactive experience featuring physical and digital representations of how plastics affect marine ecosystems. Presented by the nonprofit Lonely Whale, in collaboration with HP and online media company ATTN:, the museum is open to the public from Dec. 6 through Dec. 8.

The timing is fortuitous, as world leaders meet for the annual U.N. climate talks in Madrid (COP25) with a greater focus on the oceans than ever before.

Ocean health is of great concern to Chile, the president of this year's COP. The South American nation is one of more than 20 countries to include ocean solutions in commitments to the Paris climate agreement—and it hopes to leverage the talks to inspire other nations to do the same, declaring COP25 the first "Blue COP."

Along with the ocean issues you'd imagine would relate to climate change, such as acidification and ocean warming, plastic pollution is emerging as a key concern for the U.N.

In a special report released in September, the Intergovernmental Panel on Climate Change (IPCC) cited marine pollution as one of nine major concerns facing the world's oceans and named plastic waste as a top contributor.

“Marine pollution, such as sewage, sunscreens, fertilizers and plastics, can act synergistically with climate change factors, increasing the detrimental impacts of both," Dr. Craig Downs, executive director of Haereticus Environmental Laboratory, a nonprofit scientific organization focused on natural ecosystems, said in a statement. "Together, climate change and marine pollution are a guarantee for the destruction of marine vitality.” 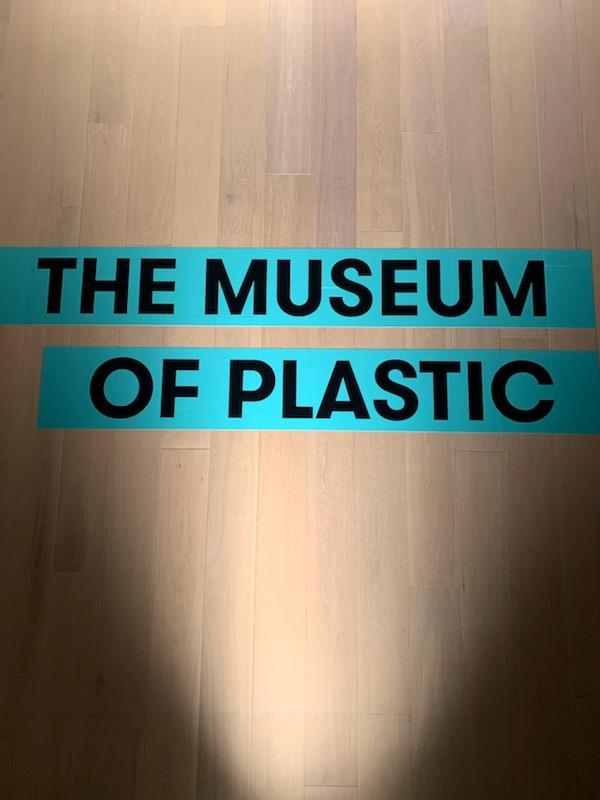 Inside the Museum of Plastic

All of this sounds pretty dismal, and as we've seen for years, doom-and-gloom is often not the most effective way to start a solutions-oriented dialogue.

With the Museum of Plastic, Lonely Whale hopes to make raising awareness of ocean issues fun, dynamic and engaging (not to mention Instagrammable), though the content is still decidedly serious.

Visitors are greeted with the Ocean Voyage room, where a thriving virtual ocean slowly fills with plastic waste, illustrating the fact that the oceans will contain more plastic than fish by weight by 2050. They can also take selfies with an enormous receipt quantifying how much money global citizens spend on plastic water bottles and how the cash could be used to help the environment. 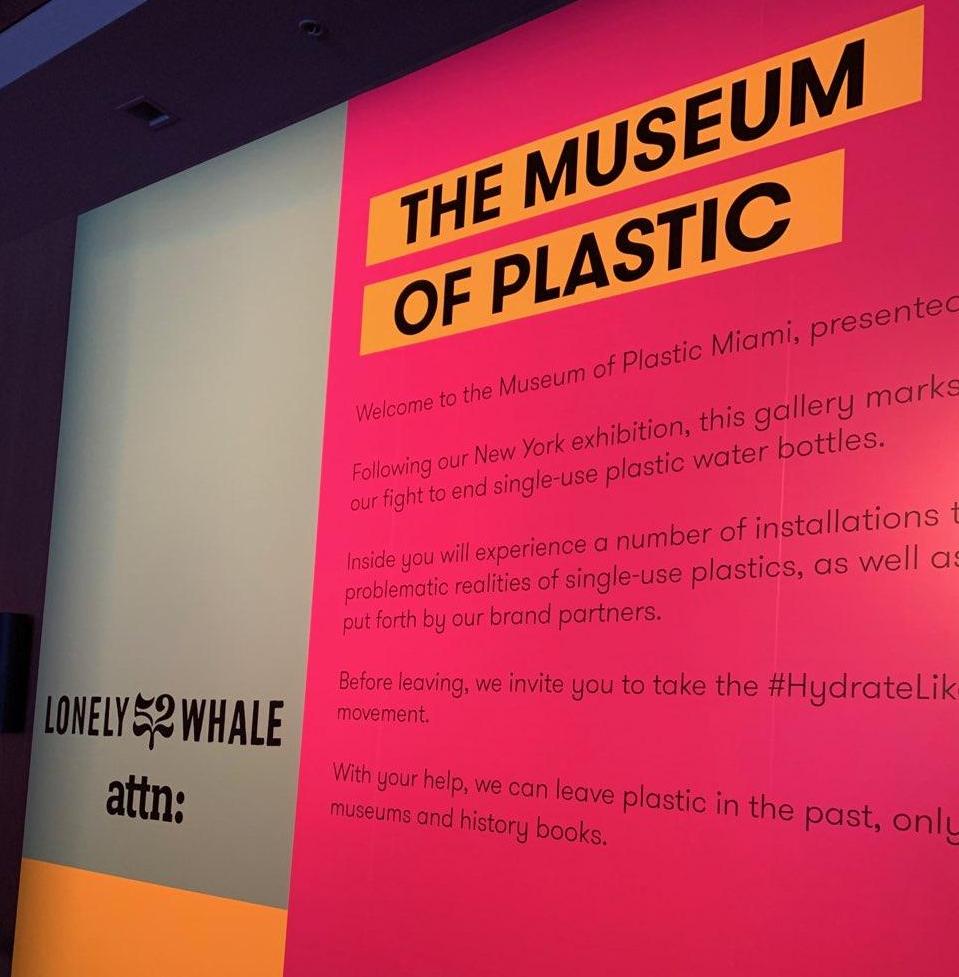 That's no small task: Around 1 million single-use plastic bottles are sold every minute around the world, and revenue from bottled water sales is expected to reach $200 billion before 2023—compared to less than $10.5 billion for the reusable bottle market. Considering how pricy some reusable bottles can be—and how cheap bottled water (which, in the U.S., is often just unfiltered tap water encased in plastic) is by comparison—the discrepancy is pretty shocking.

Still, judging by the reaction to Lonely Whale's campaign, it seems people are becoming more inclined to consider different choices: Over the past six months, more than 60 million people pledged to ditch bottled water through the campaign’s social media challenge, #HydrateLike.

“We're all starting to be willing to have a conversation around our behavior and our everyday choices,” Dune Ives, executive director of Lonely Whale, told TriplePundit in June. “Are we okay with a million species going extinct under our watch? Are we okay with 8 million to 12 million metric tons of new plastic entering the ocean every single year? Are we okay with emissions continuing to rise? Those are our choices.” 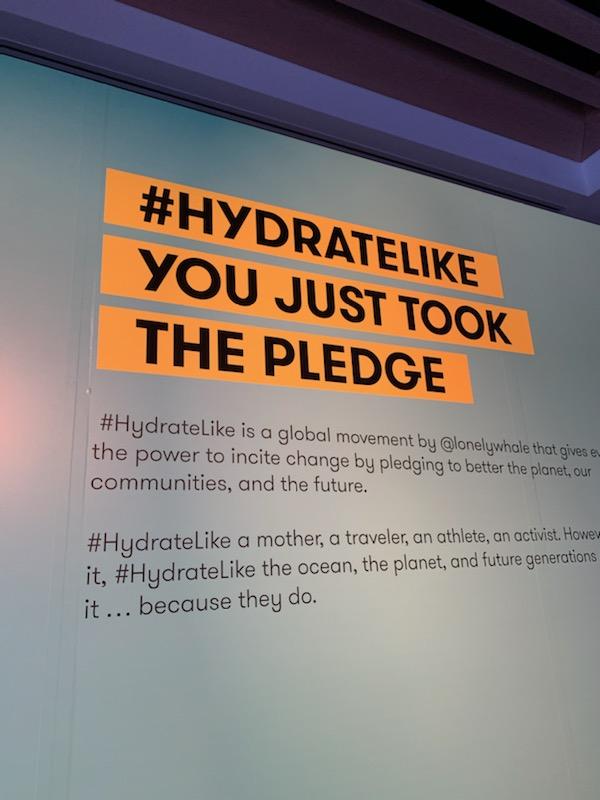 We got an early look at the Museum of Plastic at the VIP opening in Miami Beach last night, where collaborator HP came with some news of its own.

The technology company linked up with fashion designer Heron Preston to design a sustainable alternative to a stubborn piece of packaging: plastic poly bags.

The replacement pouches unveiled at the Museum of Plastic are certified for home compostability and could replace poly bags in retail packaging, according to HP—which has been involved in the fight against plastic waste for decades.

Since 1987, it has collected and recycled more than 100,000 tons of plastic for use in new ink cartridges. More recently, it expanded into recycled-content electronics, unveiling a display monitor and laptop made with ocean-bound plastic from its Haiti supply chain and, in October, releasing a carbon-neutral printer made with 30 percent recycled plastic.

“In a world full of bad news, plastic is solvable,” Ives said in a statement. “We know how to solve it, now it is down to the will of leaders and politicians. Our aim is that these conversations about solving the plastic pollution crisis will begin a cultural transformation.”