As kids head back to school, teachers are once again battling the effects of the dreaded summer slide—a term used to describe the tendency for students to lose some of the achievement gains they made during the previous school year.

One study using data from over half a million students in grades 2 through 9 found that students, on average, lost between 25 and 30 percent of their school-year learning over the summer.

Studies also show that the loss is far greater for lower-income students than middle-class students. One reason for the gap is the lack of access to educational resources over the summer months. Academic researchers refer to this as the “faucet theory.” According to the theory, the “resource faucet” is on for all students during the school year, but over the summer, the flow of resources slows for students from disadvantaged backgrounds.

According to Susan Neuman, professor of childhood education and literacy development at New York University’s Steinhardt School, many low-income students live in “book deserts.” In research she conducted in a low-income community in Washington, D.C., for example, Neuman found that, given the low access to books in the neighborhood, 830 children would have to share one book in order to read.

“Book deserts seriously constrain young children’s opportunity to learn and have an unfortunate consequence in their school readiness,” Neuman says.

The summer slide is just the tip of the iceberg. We are facing a literacy crisis in the United States.

According to recent research, more than 30 million adults in the United States cannot read, write or do basic math above a third-grade level. Children whose parents have low literacy levels have a 72 percent chance of being at the lowest reading levels themselves. These children are more likely to get poor grades, display behavioral problems, have high absentee rates, repeat school years or drop out, according to the National Bureau of Economic Research.

Other studies confirm the widening literacy gap, which authors say will lead to the perpetuation of poverty and a resultant expanding unskilled workforce in the coming years.

This challenge is too big for any one sector

The U.S. Department of Education is scrambling to address the growing crisis, but it is just too big. Increasingly, businesses are realizing the immensity of the challenge in their communities and the potential impact it could have on their own sustainability. They also realize that their employees and customers are looking to them to do something.

“There is an expectation today that companies will respond and help,” says Icema Gibbs, director of corporate social responsibility for JetBlue Airways and architect of the company’s award-winning Soar with Reading program. “It’s incumbent upon companies to help. Everyone has to get involved to move the needle on social change.”

Through its Soar with Reading program, JetBlue has been tackling the issue of book availability in underserved communities since 2015. Using a creative approach, the program provides free children’s books through vending machines in a different city every summer.

For selection in the program, a city must be one where JetBlue flies and where a book desert exists. To date, JetBlue has brought Soar with Reading to Detroit, San Francisco and Oakland, Washington, D.C., Fort Lauderdale and, this year, New York City.

Once a new city is selected, Gibbs’ corporate responsibility team works with local community leaders, educators and community organizations to identify neighborhoods that would benefit most from the program and high-traffic areas where kids and families visit often, such as community centers.

Vending machines are set up from July through September and restocked every two weeks with new titles that feature a wide array of age-appropriate books that also reflect the distinct languages and cultures of the community.

“We work long and hard to ensure we select books that represent the neighborhoods we go into,” Gibbs explains. For example, when Soar with Reading took up residence in San Francisco, Gibbs and her team ensured there were books available in Mandarin. 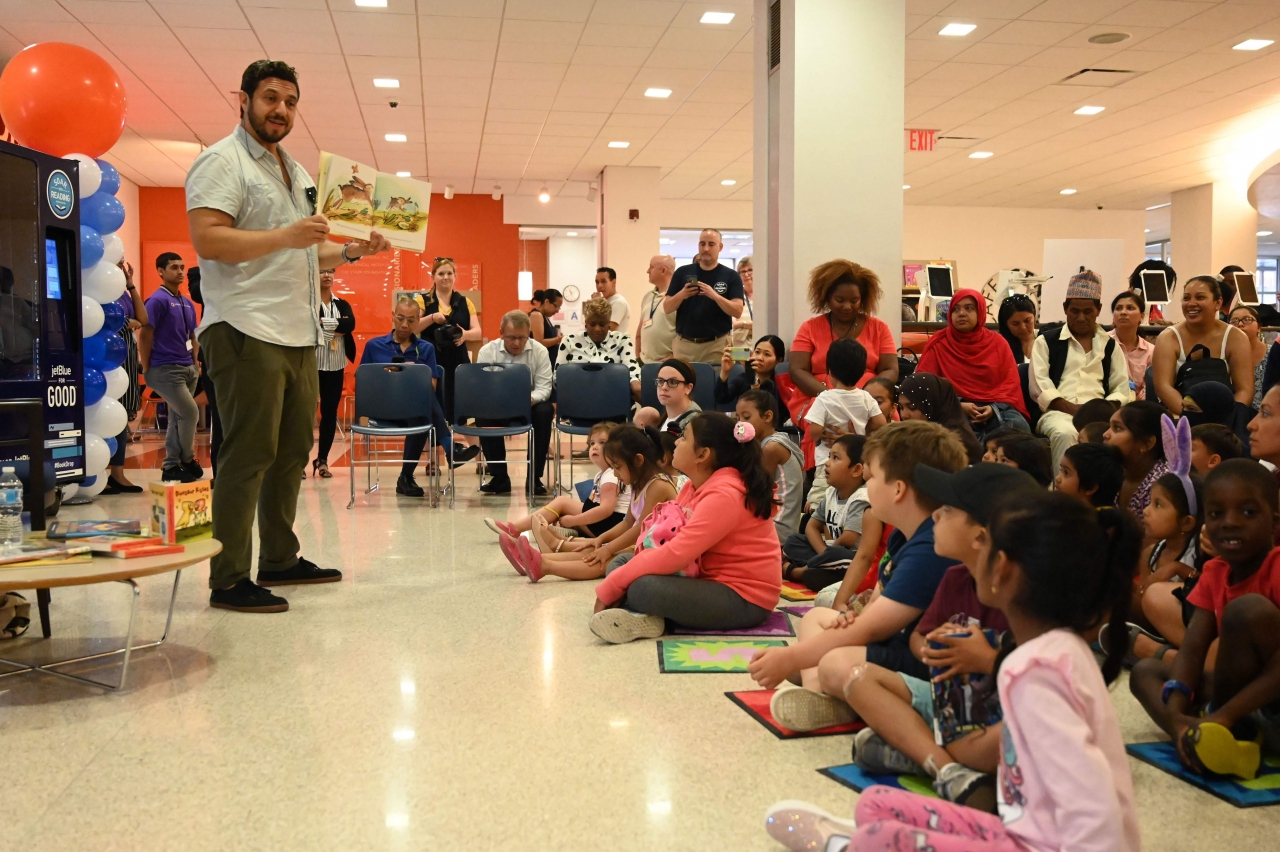 Kids and parents line up for new books

“We know people rely so much on their phones and tablets, even in low-income neighborhoods,” Gibbs says. “But what is consistent across all socioeconomic platforms we’ve measured is that kids like to feel the book they are reading, and they like to build their own home library.”

JetBlue is able to track the ZIP codes of people who use the machines, and the company found that some families travel from miles away. Gibbs says some even place the dates on their calendar of when a new cycle of books will arrive.

She gives the example of a grandmother in the Anacostia section of Washington, DC who brought her granddaughter to the vending machine whenever there was a new shipment. She became known as the “book lady” because she would bring books back for all the other children in her housing complex.

At the Soar with Reading launch event this past July in Brooklyn, actress Aisha Hinds was talking with some young girls, Gibbs recalls. “One of the girls said to Aisha, ‘These books are big! How are we supposed to read them?’ Aisha told them that she wanted them to form a book club and to make sure they all were reading together.

“This little girl’s eye lit up and she said, ‘That is exactly what we will do.’” Gibbs says, with a satisfied laugh, that the girl and her friends went through every age-appropriate title in the vending machine that summer and kept up their book club after the program ended.

Chance for JetBlue employees to give back

Soar with Reading also offers JetBlue crewmembers from across the country a chance to get involved in their local communities. They can volunteer their time at vending machines to help kids select books, or, if there is no vending machine in their city, they can order titles to be included in the vending machines through JetBlue and host book readings at local schools, libraries or even at their own airport.

To date, JetBlue and its community partners have donated and distributed more than $3.5 million worth of books through the Soar with Reading program, and they don’t plan to stop anytime soon given that their research shows the program is having an impact.

“Studies have shown that owning 25 books or more has a sizable effect on achievement, with each additional increment of books, such as 10 or more, improving achievement,” says Neuman, who is also a member of the Soar with Reading Advisory Board. “This program allows children to own books and combat the knowledge loss that so often accompanies summer.”

Some may say that Soar with Reading is just one program in one city each year. But what if other companies also stepped forward to support similar programs in the cities where they operate?

As Neuman told Forbes last year, “Changes like this in the environment can strongly influence changes in behavior, and along with generous and powerful policy solutions, we can begin to close the achievement gap for low-income children."