Pollinator Habitats Are Declining Worldwide, But Business Can Help

Bees are necessary to pollinate plants, including crops we use for food, but bee populations are in decline worldwide. For well over a decade, colony collapse disorder (CCD) has shaken the agricultural sector and challenged scientists. This mysterious phenomenon occurs when the majority of adult worker bees in a colony disappear, leaving the queen behind.

Though reports of CCD have declined in recent years, it’s far from the only threat facing bees. Exposure to pesticides, as well as parasites, pests and pathogens, continue to threaten the health of bee populations, according to the U.S. Department of Agriculture (USDA). Bees and other insects are also increasingly vulnerable to habitat loss and weather fluctuations associated with climate change.

Co-director of the pollinator program for the Xerces Society, Eric Lee-Mader is the go-to guy for bees. Based in Portland, Oregon, the Xerces Society is among several groups spearheading the effort to protect pollinator habitats and stabilize bee populations worldwide.

Their hard work is paying off: “We have more research [and] more concrete science than we've had before,” Mader told 3p. “For a long time, pollinator declines were partially documented, partially speculative. And we're now entering the timeframe where they're more documented and less speculative.”

TriplePundit last spoke with Mader back in 2017. We recently caught up with him for an update on the science, conservation, and management of pollinators and their habitats. “The situation is not improving, and arguably it's deeper and more entrenched and getting worse than we have previously thought,” he explained. “I think we arrive at kind of a holistic picture of what's going on with pollinators by looking at this whole spectrum of different studies that are out there now being published.”

Among the recent research, a paper published in the journal Biological Conservation earlier this year found that more than 40 percent of insect species globally are threatened with extinction within “the next few decades.” Similarly, the landmark “insect Armageddon” study published in 2017 warned of a 75 percent loss of insect biomass since the 1980s.

Among many of the drivers pushing pollinators to the brink, like climate change and the pervasive use of chemical pesticides, is habitat loss from intensive agricultural land conversion.

“Conservatively speaking, just in agricultural lands, there’s probably been a 20 million-acre loss of habitat over the past decade,” Mader says. Countering that trend is approximately 700,000 acres of land restoration for pollinator habitat, according to best estimates.

There is no candy-coating the situation. Clearly, we humans must do more to address the precipitous decline of bees and other at-risk insects.

What business can do to save the bees

An important part of Mader’s work is collaborating with businesses and their agricultural supply chains. The Xerces Society works with food and agriculture companies like General Mills in a multi-pronged approach aimed at consumer awareness, habitat conservation and on-the-ground guidance for improving agricultural practices.

When we spoke with Mader, he had just returned from a trip to California on behalf of General Mills. The Xerces Society’s collaboration with the company began about seven years ago with some pilot projects to help restore pollinator habitat on tomato and almond fields in California’s Central Valley.

Based on these initial projects, Xerces developed “very high-quality, compelling case studies and demonstration of how we can incorporate habitat at scale back into [a company’s] supplier farms,” Mader told us. Farmers working with Xerces added miles of hedgerows, native perennial wildflower strips and cover crops, where before the Valley's vast almond orchards were “like moonscapes below the trees,” Mader said.

“We really flipped that model around and worked with [farmers] to formulate and develop feed mixes that can provide flowers and habitat in the orchard itself and can be mowed down before the harvest happens,” he told us. “It's completely compatible with their management system.”

These new plantings provide vital habitat for pollinators and other insects, allowing both agricultural land and natural ecosystems to co-exist together. The success of these early models motivated General Mills to come back to Xerces to scale up these methods to a “significantly larger portion of their supply chain,” Mader explained.

The landscape is changing

Against the backdrop of the somber story of pollinators, the landscape is changing—literally. “Collectively, we're putting in miles of hedgerows every year; we're putting in acres and acres and acres of flowering habitats and flowering cover crops on farms,” Mader said. “Just through that supply chain work ... we are easily impacting tens of thousands of acres of farmland and creating conditions that are significantly more amenable to pollinators.”

Efforts like these make an impact, but Mader stresses that the food and agricultural sector needs more participants like General Mills that are truly committed to take the problem seriously.

This is the real message here: Key partnerships between science, research and business have proven solutions. What we need now is for the food industry to step up, at scale, and implement these solutions.

Otherwise, the cupboard is bare, as demonstrated by this pop-up installation in Toronto. In 2017, General Mills' Honey Nut Cheerio's team in Canada opened a temporary “Grocery Store of the Future,” which shows what our food supply would look like with and without bees. 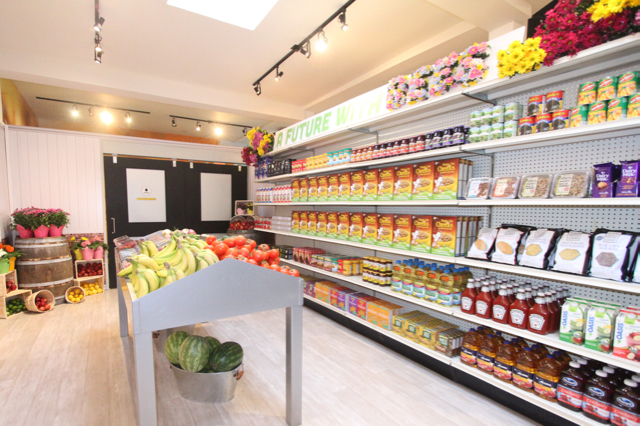 And here's what those same shelves would look like if we fail to protect bee populations: 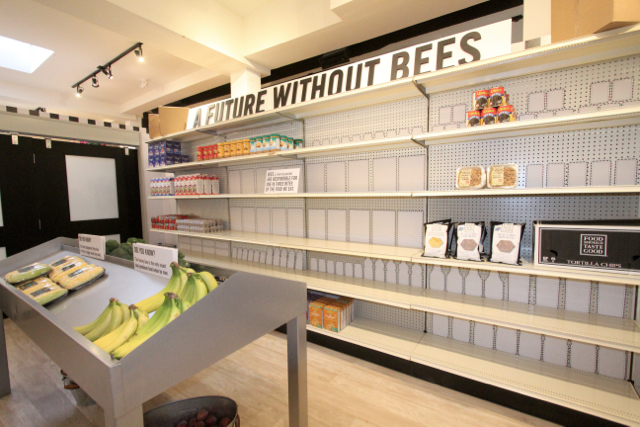 As is often said, a picture is worth a thousand words.