You've probably heard the startling statistics about food waste in the U.S.—around 40 percent of all the food we produce ultimately goes uneaten. Most of this food is thrown away by consumers or consumer-facing businesses like restaurants and grocery stores. Additionally, worldwide more than 10 million tons of fruits and vegetables remain unharvested at farms every year, according to a 2016 report from Rethink Food Waste Through Economics and Data (ReFED), a multi-stakeholder nonprofit group.

In addition to factors like pests and weather conditions, on-farm food waste is often traced to shoppers' preference for fruits and veggies that are uniform in shape, size and color. That means grocers often opt not to purchase misshapen, oddly-colored or unusually-sized produce—exacerbating the waste problem and making it harder for farmers to turn a profit. “I would say at times there is 25 percent of the crop that is just thrown away or fed to cattle,” Wayde Kirschenman, who runs a family farm near Bakersfield, California, told the Guardian. “Sometimes it can be worse.”

On this front, food delivery company Imperfect Produce claims to offer a solution. Founded in 2015, the San Francisco-based company sells subscription delivery boxes filled with so-called "ugly" fruits and vegetables, at prices 30 percent lower than retail. Since its inception, Imperfect Produce has salvaged 40 million pounds of fruits and veggies that may have otherwise gone to waste, Fast Company reported.

This month, the company is expanding its discounted grocery lineup beyond produce to include other “imperfect” foods, such as packaged grains, nuts, oil, bread, and other pantry staples and snacks. 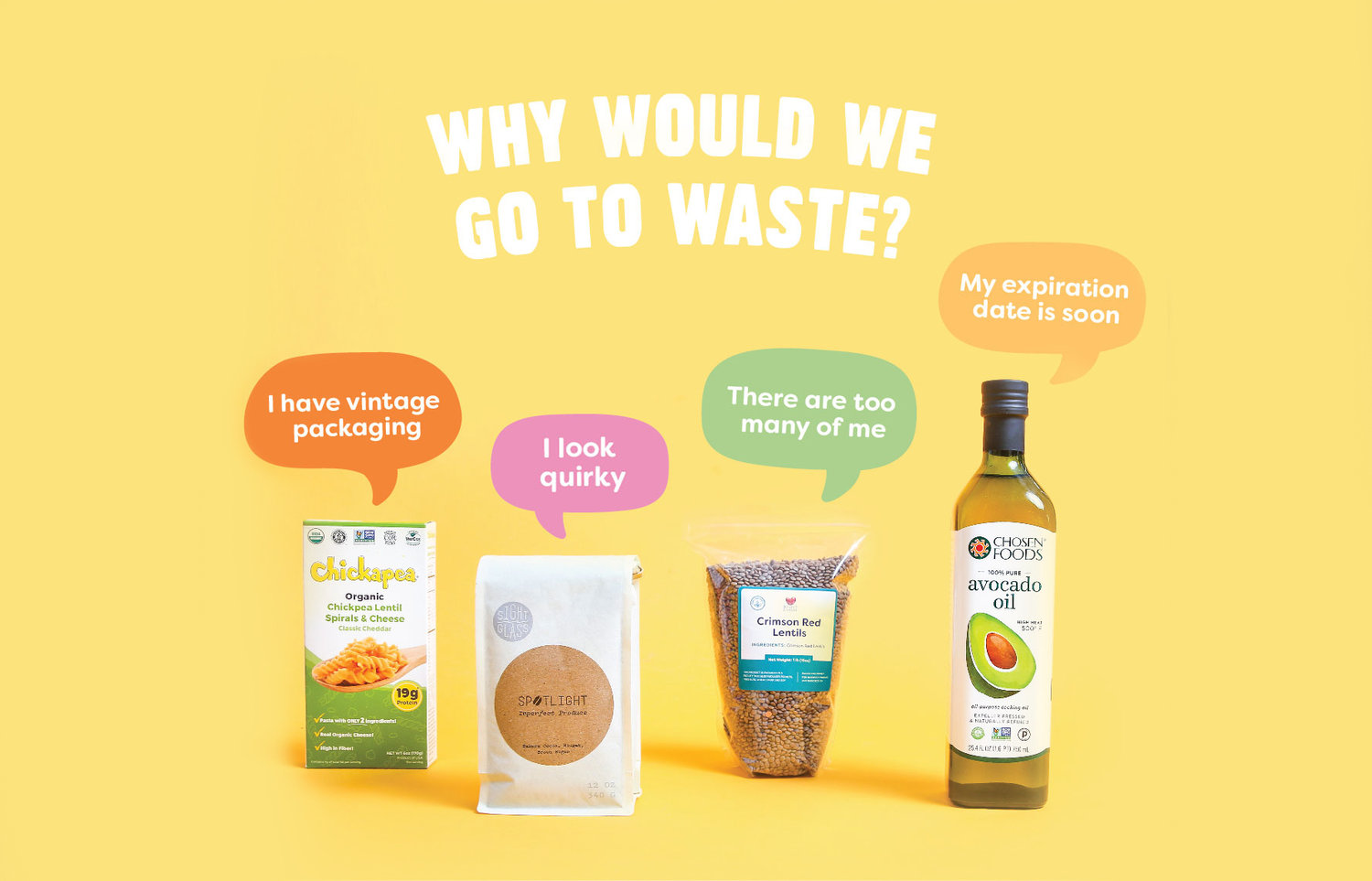 These include foods that are nearing their “best by” dates but are still perfectly edible, such as an avocado oil produced by Chosen Foods and made available through Imperfect’s initial packaged goods offering. Its so-called Imperfect Picks lineup also features products that can’t be sold in grocery stores because the manufacturer recently updated its branding or packaging, such as pastas from Chickapea and Blue Evolution and whole grain products from Bob’s Red Mill.

The company’s lineup also includes items that were over-ordered or cannot be sold due to irregular shape or size—such as “peaberries,” or undersized coffee beans, from Sightglass coffee. Additionally, the dried lentils in its lineup “were part of a massive order placed by a large buyer who downsized their purchase at the last minute, leaving an organic grain producer in Montana with 250,000 pounds of lentils,” Imperfect wrote on its blog.

Imperfect Produce is far from the only company in the ugly food game. Philadelphia-based Misfit Markets sells similar subscription boxes filled with funny-looking fruits and vegetables, as does the Baltimore startup Hungry Harvest. At the retail level, grocers around the world are embracing these formerly forgotten foods—including Sainsbury’s in the U.K., Intermarché in France, Loblaw in Canada and Kroger in the U.S. Imperfect also collaborated with Whole Foods back in 2016 to make misshapen fruits and veggies available on store shelves.

However, not everyone is sold on the sale of “ugly” food—and particularly ugly produce—as a means of combatting food waste. “As the Atlantic reported, criticisms of ugly produce delivery companies range from them rerouting produce that might otherwise reach food pantries, to them encroaching on turf that once belonged to community farmers,” Ben Paynter wrote in Fast Company.

On the farmer side, reviews are mixed. The Atlantic interviewed the business manager of an organic growers cooperative in Pennsylvania, who said ugly produce delivery company Misfits Market helped farmers earn a profit for produce that couldn’t be sold at grocery stores and was too much to sell in farmers markets alone. But the magazine also covered a Washington organic farm that partially blamed ugly produce companies for forcing it out of business.

“Honestly, the criticisms are a bit surprising,” Ben Simon, co-founder and CEO of Imperfect Produce, told the New Republic in January. He pointed reporters to a blog post where he responded to critics of the company’s business model, in which he wrote: “Our mission to eliminate food waste and build a better food system for everyone is not a side-project or afterthought; it’s our reason for being.”

The company’s consumer communications appear to back up Simon’s assertion that Imperfect Produce is genuinely invested in the fight against food waste. Most of its social media postings center around tips to help people shop smarter and store food more effectively to avoid spoilage. 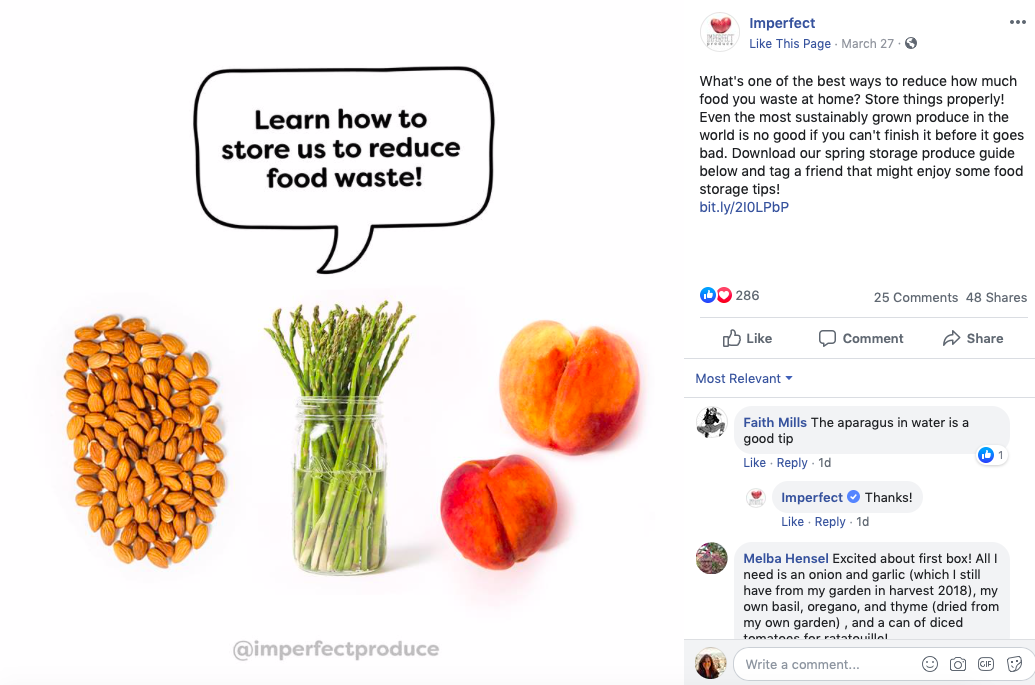 On the equity front, Imperfect works with nonprofit organizations like Urban Gleaners to provide ugly fruits and vegetables to low-income households for free. It also offers discounted food boxes for people who meet the income qualifications for the Supplemental Nutrition Assistance Program (SNAP, also known as food stamps)—which takes $150,000 per month to subsidize, Fast Company reported. “We lose money on all these orders, but do it because it’s the right thing to do and because we believe passionately that nobody should be priced out of good food,” Simon wrote in his blog post.

And, as Paynter of FastCo pointed out, the company makes its services available in every ZIP code of the cities it serves, unlike many other subscription box companies.

As Simon concedes, “Imperfect is not and never will be a silver bullet for every problem plaguing the food system.” But all criticism aside, one thing is clear: This social enterprise is growing quickly. Along with its expanded product offerings, the company—which counts NBA star Kevin Durant among its investors—is looking to expand into a dozen new markets this year and recently brought its subscription box service to the Twin Cities, Philadelphia and Madison, Wisconsin.