From Local to Global: How Silicon Valley Companies Invest in Community

When Policy Gets Personal: Postmates Takes a Stand for Immigrants' Rights

This article series is sponsored by Silicon Valley Community Foundation and produced by the TriplePundit editorial team.

As tensions boil around U.S. immigration policy, some of the country’s largest companies are taking a public stand for immigrants' rights. The U.S. tech sector increasingly turns to the global talent pool in order to build its workforce and as such has been particularly vocal.

In 2017, when the Donald Trump administration imposed restrictions on travelers from Muslim-majority countries, more than 150 Silicon Valley tech companies filed a brief in opposition. The brief came after a host of big-name tech CEOs voiced their opposition to the travel ban in public statements, employee memos and social media.

Bastian Lehmann, co-founder and CEO of the on-demand delivery company Postmates, penned a poignant blog post in response to the ban, boldly writing: “I no longer believe it to be reasonable to remain silent.” Lehmann, an immigrant himself, went on to make both a moral and an economic case against restricting immigration and travel to the U.S.

While celebrating the country’s storied history of embracing “the diversity cultivated through immigration,” he noted that upholding these values is more than just the right thing to do. For companies like Postmates, it’s also good business. “We choose not to discriminate [against] individuals based on where they are from,” Lehmann wrote, “and it has suited us well as we have been able to hire and employ the most talented people from around the world.”

The business case for advocacy on immigrants’ rights

Postmates, which filed for an initial public offering (IPO) earlier this year, is one of the top four delivery apps in the U.S. by market share. Its on-demand delivery platform for everything from food to household products now reaches around half of all U.S. households.

Unlike other gig economy companies like ride-sharing giants Uber and Lyft, the Postmates marketplace is three-sided: It connects local merchants to customers via an app and taps independent contractors (or small-p "postmates," a term used to describe the company's employees as well) to make deliveries. This high exposure to local stakeholders presents a “very strong business interest in wanting to stand up for inclusivity in the communities that we are able to call home,” said Vikrum Aiyer, vice president of public policy and strategic communications for Postmates.

Over the past two years, Postmates has joined peers in the tech sector in amicus briefs and comments to the Department of Homeland Security in opposition to restrictions on H-1B visas for highly-skilled workers, roll-backs of provisions for immigrant founders, and the so-called “zero-tolerance” immigration policy that resulted in thousands of children being separated from their parents at the U.S.-Mexico border.

“We're only one small voice in this broader ecosystem of stakeholders that care about these issues. But we felt it was important to us to do right by our marketplace, to do right by the diversity that the company represents and frankly thrives upon, and to do right by our corporate values,” Aiyer told us.

In their brief against the travel ban, Postmates and its peers in the tech sector emphasized the economic argument alongside the moral imperative, citing the “substantial harm” the ban would inflict on “U.S. companies, their employees and the entire economy.”

Aiyer, a former White House senior advisor under President Barack Obama, further underscored this point in the context of Postmates’ three-sided marketplace—which touches stakeholders at all levels of more than 400 cities across the U.S., many of them immigrants or members of immigrant families. “This is not just a moral issue,” he said bluntly. “It is also an economic competitiveness issue.”

Central to Postmates’ advocacy is an ongoing partnership with the American Civil Liberties Union (ACLU), culminating in educational initiatives for Postmates drivers, awareness campaigns for its customers, and funding to benefit the ACLU’s fight for immigrants’ rights. 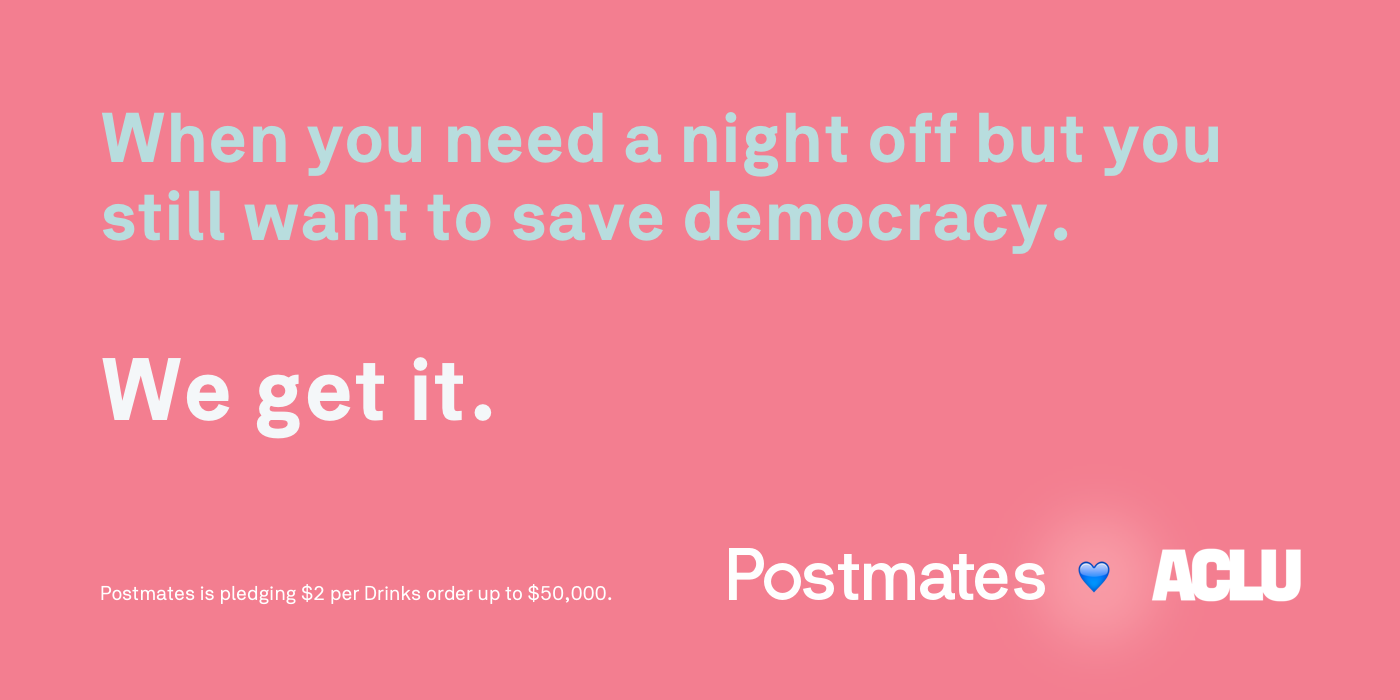 In 2017, when rumors began to circulate that the Trump administration would end the Deferred Action for Childhood Arrivals (DACA) system—which protects undocumented immigrants who came to the U.S. as children from deportation, if they meet certain criteria—word spread quickly among Postmates drivers.

“What was quite disheartening is that we actually heard questions from our fleet of postmates asking whether they were still able to perform services on the platform because of what seemingly felt like an attack on young people who grew up in this country,” Aiyer told TriplePundit.

Some queries came from DACA recipients (also known as Dreamers) who drive for Postmates, while others came from drivers who were concerned about friends and family members, Aiyer explained. Both perspectives were concerning to the company, as they indicated that its stakeholders felt “unsafe,” Aiyer said. “We started working with the ACLU to understand the rights of individuals,” he continued.

The company compiled the ACLU’s latest “know your rights” information into an email campaign and announcement on the driver-facing side of its app. The campaign proved to be a teachable moment for the company, and it set the stage for ongoing action and advocacy.

“Some may say, 'That's kind of just copying and pasting information and flipping it around. What's the big deal about that?' But I think what this showcases for us is that people who have megaphones, no matter how big or how small … ought to use them,” Aiyer said.

For Postmates, that megaphone takes the form of 250,000 merchants, hundreds of thousands of drivers, and several million customers in the U.S. alone—positioning the company to amplify vital information from credible organizations like the ACLU. “From that point forward, we stayed closely in touch with the ACLU on other activations that we can engage in to raise awareness,” Aiyer said.

The company has since run public awareness campaigns in partnership with immigrant-owned businesses like The Halal Guys, as seen in the video below, and donated proceeds from app-based sales to support the ACLU’s work defending immigrants’ rights.

As immigration-related topics find their way into the news with increasing regularity, the Postmates-ACLU partnership—and many others like it—are constantly evolving.

“We are a smaller business compared to [others in the tech space], and that gives us the ability to experiment with some risk-taking. It also allows us to monitor, adjust and account for what it exactly means to partner with the ACLU or take an immigration stance,” Aiyer explained. “When you run an experiment and you take a stance and it upsets the customer and it’s one less purchase, is that reason enough to not stand up for that very community that is impacted by those policies, which will ultimately hurt your ability to thrive as a business?”

His inclinations are backed up by data that indicates purpose is influencing purchasing decisions: Nearly two-thirds (63 percent) of global consumers prefer to buy goods and services from companies that stand for a shared purpose that reflects their personal values and beliefs, according to a 2019 survey.

Of course, personal values are different for everyone—and it undeniably takes courage to step into the fray and brave potential blowback from customers and other stakeholders. But a growing number of companies have decided it’s worth the risk to stick with their values and learn from their journey along the way.

“Online and on social media, you get rampant feedback one way or another—some people agree with what we’re doing; some disagree; some just look at us as the delivery system for their burritos or their Thai food and don’t really want to know about anything else,” Aiyer said. “At the end of the day, that confirms what we believe this country to be, which is a marketplace of ideas.”