As consumers continue to stock up on their products, the world’s largest CPG (consumer packaged goods, or “fast-moving consumer goods”) corporations are among the multinationals that stand to benefit the most during this pandemic. Whether it’s the cleaning agents to help keep the novel coronavirus at bay or the shelf-stable foods we seek as we’re sheltering in place, these CPG companies are also in a strong position to be of assistance during this crisis.

Here’s a roundup of how these companies have been assisting the global effort to take on this ongoing pandemic.

The beverage giant has promised $13.5 million in grants through its foundation to five NGOs that are at the front lines of the humanitarian response to this crisis in North America. At least one of its bottlers is producing hand sanitizer, while two of its suppliers are working with local distilleries to make plastic bottles, fill them with the solution, and deliver them to hospitals. Another bottler in New England is diverting plastic sheeting so that it can be molded into face shields for healthcare workers.

As of April 3, the oldest of the major CPG companies (dating back to 1806) said it plans to donate $20 million in cash as well as health and hygiene products to local NGOs. The efforts include support for frontline healthcare workers in New York City and the donation of its Hill’s Pet Nutrition products to animal shelters and local pet adoption agencies. The company has also retooled five of its global manufacturing plants to make 25 million bars of soap that will be wrapped with the World Health Organization’s (WHO) instructions on proper handwashing. “One of the most important ways we can help stop the spread of this virus is for organizations from every sector to bring together the best of what we each do for the greater good,” said Noel Wallace, CEO of Colgate-Palmolive.

The purveyor of Wheaties, Epic meat bars and Annie’s mac-and-cheese said on April 1 that it will donate $5 million through its foundation to secure meals for children in the midst of community center and school closures. General Mills also asked office-based employees to work temporarily at its manufacturing facilities to help meet demand. In addition, it guarantees two weeks of paid sick leave to employees who voluntarily self-quarantine, or are under order to do so. The company also announced it will pay an undisclosed bonus to essential employees who are working at its food manufacturing plants.

The maker of Oreos, Triscuit crackers, Cadbury chocolate and Tang announced on March 23 that it would contribute $15 million in both cash and in-kind support to the global fight against COVID-19. Many of its hourly workers will receive a $2-an-hour bonus to be paid as a lump sum for hours logged between March 23 and May 2. The company also promised sales representatives with a $125-a-week bonus.

The world’s largest CPG company by many rankings, Nestlé announced last month it would donate 10 million Swiss francs ($10.3 million) “for immediate deployment in countries where it is most needed.” In a partnership with the International Federation of the Red Cross and Red Crescent Societies (IFRC), the company has said it would donate food, nutritional products and bottled water for efforts helping out those who are the most affected by this pandemic. Nestlé also insists it will support the IFRC with its logistics in various countries. Furthermore, the company pledged that hourly and salaried employees that were not able to show up at work due to temporary stoppages would be paid for a minimum of 12 weeks.

On March 22, PepsiCo announced it would “invest” $45 million in efforts to bring food and other resources to communities affected most by COVID-19. That effort, according to the company, includes 50 million meals, including 20 million meals to at-risk children. In a bid to support the work of NGOs such as Feeding America and Meals on Wheels, the company is contributing $3 million for Team Rubicon’s food delivery operations across 100 U.S. cities. PepsiCo says this global effort will involve over 35 partners across 40 nations. In addition, the company said it would grant two weeks of paid sick time to employees who need to quarantine or take care of a sick family member in their home. If any of the company’s sites have to close due to COVID-19, PepsiCo pledged those workers would receive 100 percent of pay for up to 12 weeks if remote work were not an option.

To date, Cincinnati-based P&G says it has donated cash and in-kind support to the tune of $15 million. Its European division has pledged $10 million (€9.1 million) in financial support and product donations, $1 million of which it has tasked the IFRC to distribute. The company has boosted hand sanitizer production at five of its factories, and a dozen plants worldwide will be retooled to manufacture face masks.

The house of brands that includes Windex and Scrubbing Bubbles, as well as the natural cleaning products made by Method and Ecover, announced last month it would donate $1 million to the Centers for Disease and Prevention’s (CDC) Emergency Response Fund. A week later, SC Johnson said it would donate $5 million in cash and products to support the most “urgent public needs and those on the front lines.” Most recently, the Wisconsin-based company said it would spend $1 million in a partnership with the NGO Save the Children in an effort to education children and their families on the importance of handwashing and personal hygiene as means to stop the spread of the novel coronavirus. 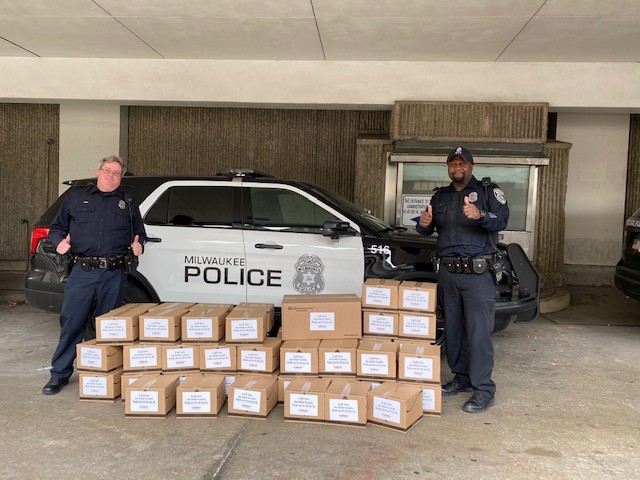 The Dutch-Anglo CPG giant has been running global handwashing campaigns for years. In late March, Unilever announced a $122 million partnership with the United Kingdom government to fund a global campaign that showcases the importance of handwashing. This program will in part serve to raise awareness of hygiene, but it will also provide as many as 20 million cleaning products to the world’s poorest people so they have what they need to stay healthy during this pandemic. The company’s campaign has been forceful and blunt: “Remember, any soap – bar or liquid – if used properly, will help keep your hands clean and safe,” said one of the company’s senior scientists at its Bangalore research and development center.