EU Leaders Debate the Future of a European Green Deal

With discussions already underway about how to restore and sustain the European economy after the novel coronavirus pandemic, European Union (EU) leaders have made it clear they want to see more sustainable development in long-term economic plans, and stimulus funds may depend on how sustainable those plans are. Once the continent emerges from this current crisis, could the results include what some advocates hope are a "European Green Deal?"

A long-term focus on sustainable development

EU leaders released a statement March 26 following a video meeting that called for member countries to start preparing for a “normal” time similar to before the pandemic. EU leaders are hopeful that such planning includes provisions for an increased focus on sustainability, as well more digitalization of business operations across the continent.

The statement re-enforces the EU’s commitment to its European Green Deal, an outline to help Europe become the world’s first climate-neutral continent by 2050. Some EU members had asked that the Green Deal be put on hold until industries fully recover from the devastation resulting from the coronavirus pandemic, but the mood of many in the EU leans toward folding the European Green Deal into recovery.

“People’s welfare in the longer term is inextricably linked to the health of our environment and climate,” Ester Asin, the director of the WWF’s European policy office, said in a EURACTIV article. “A truly ambitious, people-centered European Green Deal must be part of the response and will leave Europe better equipped to tackle the ongoing climate and biodiversity emergencies.”

Some executives already are on board. Karol Gobczynski, climate and energy manager for the IKEA Group, recently tweeted “EU leaders back ‘green transition’ in pandemic recovery plan to create more resilient and zero emissions economy with more jobs, lower costs of living clean air...let’s co-create [a] fairer and inclusive society.” 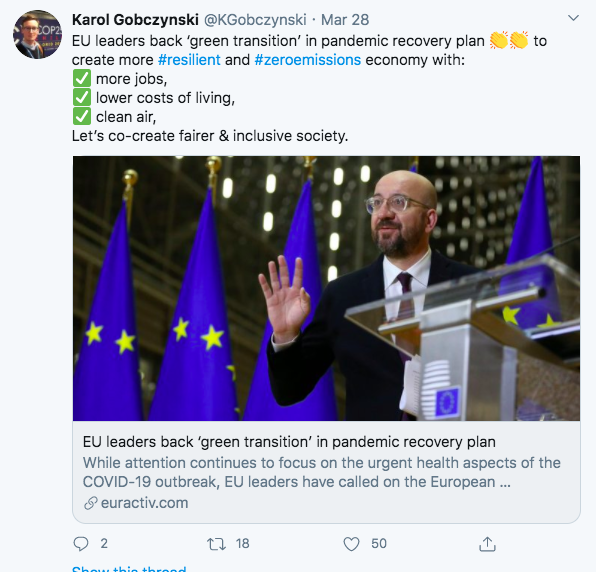 Eight environmental organizations submitted a letter calling on EU leadership to tie stimulus and bailout money to a commitment to the Green Deal, and recommended the EU invest in businesses “in a transparent, viable and sustainable way.”

“This is the time to bounce forward and accelerate the shift towards an economy which is climate neutral, protects and restores our natural world, health and wellbeing, and lets nothing go to waste - in a way that is fair and leaves no-one behind,” said the letter’s authors.

The eight authors of the letter also declared:

“…the stimulus packages must support ‘future-proofing’ companies through a rapid shift of their business models towards sustainability, thereby ensuring a much higher return on public investment. For large companies in particular, public support should be conditional on a full alignment with the Paris Agreement, and a substantial greening of capital expenditure plans.”

Europe’s transportation sector could see strings attached to any bailout

At the same time, of course, fossil fuel, automotive and airline companies also are struggling and will be applying for stimulus funds as well. Some reports indicated that car manufacturers were seeking to have new emissions standards delayed until after the pandemic, mirroring a recent decision here in the U.S.

One suggestion for ways companies could meet the European Green Deal was to require a car manufacturer to devote more time to developing electric cars in exchange for bailout money.

More than three dozen renewable energy and efficiency organizations also maintain this is a crucial opportunity to reshape business operations. “Investments in a zero-carbon infrastructure and innovative solutions are the best and most cost-effective route to economic recovery on a national and supranational level, while at the same time preparing the grounds for a secure and sustainable energy system,” according to a letter they submitted to the EU.

That doesn’t mean such a shift will be easy. “This is the big political battle,” warned Laurence Tubiana, CEO of the European Climate Foundation and a designer of the Paris Agreement, told Climate Home News (CHN).

“We can make the right choices and address the short economic crisis at the same time as making sure we don’t lock the economy in Europe into a fossil fuel economy,” Tubiania continued. “There are many areas where we could take the elements of the Green Deal and quick-start them with massive investments that governments are ready to go for anyway.”

EU Commission Vice-President in Charge of the Green Deal, Frans Timmermans, heard the sentiments, saying recently on Twitter the EU had “the ability to manage both” the coronavirus crisis and the long-term goals of the Green Deal.

Focusing on clean energies and technologies is “challenging” right now with everyone clamoring for stimulus money and just trying to stay afloat, noted Samantha Gross, a fellow in the Cross-Brookings Initiative on Energy and Climate, in a CHN article.

The lower cost of renewable energy and dropping interest rates no doubt would eventually favor large investments toward an energy transition. “But we need to get out of this crisis mode before businesses can take advantage of these conditions,” Gross added.