The LGBTQ Community Responds to COVID-19 with Self-Reliance

One of the great myths about life in the U.S. is the “bootstraps” theory, which implies that all you have to do is work hard, keep your nose clean and the rest will take care of itself. Sure, that has worked for some people over time, but the Horatio Alger story is more fantasy than fact. This is especially true in marginalized communities, including for LGBTQ people.

A history of self-reliance marked by violence

History is full of examples of communities of color, ethnicities and religious groups being excluded, only to go out on their own, rely on each other, become successful by any definition — and then be pulled down again, often with litigation or even violence. Jewish American spent decades building their communities, enduring acts of discrimination as far back as General Ulysses S. Grant’s expulsion of them from Kentucky, Mississippi and Tennessee during the Civil War. To President Abraham Lincoln’s credit, he quickly rescinded that order, though he was clear that he based the decision on constitutional grounds, not out of any sense of morality.

Black Americans spent decades building thriving communities, including “Black Wall Street” in Tulsa, Oklahoma, which fell to one of the worst race riots in U.S. history. Chinese-American communities were prey to similar atrocities, including an 1871 wave of lynching in Los Angeles. The list goes on and on: Native Americans, Japanese-Americans and Mexican-Americans have witnessed their communities being destroyed for no other reason but hatred.

The LGBTQ community has withstood a similar history during the decades leading up to Stonewall and, of course, during more recent times.

COVID-19 and its impact on LGBTQ citizens

Now, as COVID-19 has shuttered businesses and even forced some LGBTQ citizens back to the margins of society, they have discovered they, along with their organizations and businesses, have to rely on each other yet again.

Countless companies have contributed to the sense that the LGBTQ community is one that can be easily discarded. As one media strategist admitted to the digital marketing news site Digiday, the reality is that when many events during Pride Month had to go digital, it became “less tangible for brands to unite behind.” 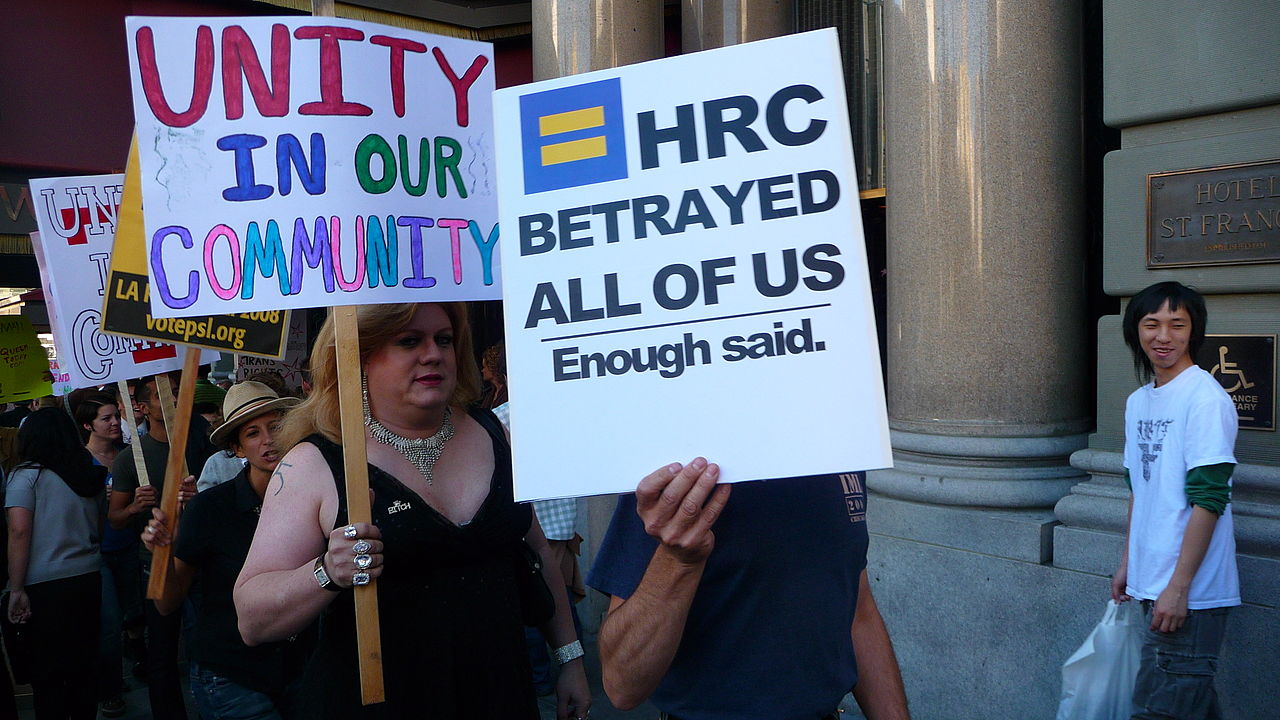 Photo: A 2008 protest resulting from what transgender activists said was the Human Rights Campaign’s exclusion of the trans community from both HRC’s events and political agenda. (Credit: Wiki Commons/Cary Bass)

Meanwhile, plenty of research exists showing that LGBTQ citizens have been experiencing a higher rate of unemployment, and concurrent risks such as food insecurity, than the general U.S. population. Ongoing stories about overt discrimination and microaggressions in the workplace show that despite pledges of diversity and inclusion, the day-to-day experience has often been one of straight white male privilege and exclusion.

The fact that the Black transgender community has coped with COVID-19’s impacts at an even harsher intensity shows that this is the time to step up, not fade out, when it comes to the business community’s support of all LGBTQ people.

Don’t “stand with” – instead, step it up

To that end, Nick Wolny, who frequently writes about entrepreneurship and tech, offers three simple yet powerful ways in which businesses, and individuals, can go beyond “allyship” during this time. Even though Pride Month is approaching its sunset this year, we don’t know what will happen next year and whether we will have to live with – or be free from – COVID-19 in the near future.

First, Wolny encourages supporting the Black Trans Lives Matter cause – whether it’s taking the time to learn about this community, or finding ways to support local nonprofits and businesses. Next, companies should use whatever platforms are available to highlight local LGBTQ organizations. Finally, Wolny insists that companies declare their commitments to the wider LGBTQ community.

As we’ve learned from the Black Lives Movement over the past several weeks, it’s not enough to “stand” with any community. Anyone can stand or take a stand. But making effort, much less investing in self-awareness, requires bold action and the harnessing of resources.

If you think superimposing the rainbow on your organization’s logo is a step, you and your organization are sadly mistaken. If anything, that will encourage stakeholders to do a little more digging and find out where you really stand on the LGBTQ community – as in, where your political donations are going and how your employees feel as part of the workplace, whether that’s in the office or virtually.