Palm oil, the world’s most consumed food oil, has been long criticized – justifiably – for its role in deforestation, fires and human rights abuses in Southeast Asia. And that criticism is now having an impact on how consumers shop. Palm oil imports for food consumption are dropping in Europe and have stalled in the United States. It is likely that that growing awareness about the environmental and social impacts of palm oil on the environment, biodiversity, and local communities has led some consumers and brands to switch to alternatives like coconut oil.

The trendy choice? Coconut oil has long been considered beneficial for not only for the environment, but human health, too. In the past few years, coconut oil has become a popular cooking and cosmetic choice, appearing on more and more shelves and ingredient labels across the country. Sales in the U.S. have soared over the past decade before declining in recent years over health concerns. It’s even been mentioned, unfortunately, as a false remedy to combat COVID-19. Overall, however, the coconut-based products industry is bullish on its future.

“There was an explosion of coconut onto the market,” said Molly Renaldo, the coconut program manager at Fair Trade USA. “There's always a lag between a trend or a fad, and then knowledge about what that really means in the greater scheme of the food system.”

The question now is whether or not coconut, which grows in the same tropical regions as oil palm, is really a sustainable alternative. Like any discussion on sustainable commodities, there’s no simple answer. Nevertheless, the coconut palm tree does have the potential to be a far more sustainable alternative due to several intrinsic factors that differentiate it from oil palm, alongside early efforts from smaller brands to source sustainably.

The main argument in favor of palm oil, and one that is touted again and again by the industry, is its productivity. Namely, for any given area, oil palm trees produce more quantity of food oil than any other plant – coconuts, soy, sunflower or canola. But in reality, it’s not fair to evaluate all food oil crops this way. Oil palm, coconuts, and soy often grow in tropical regions where biodiversity and carbon stock are high, meaning the impact to the environment of a hectare could be greater than a temperate crop like sunflower or olives, both of which can be grown in less biodiverse regions. 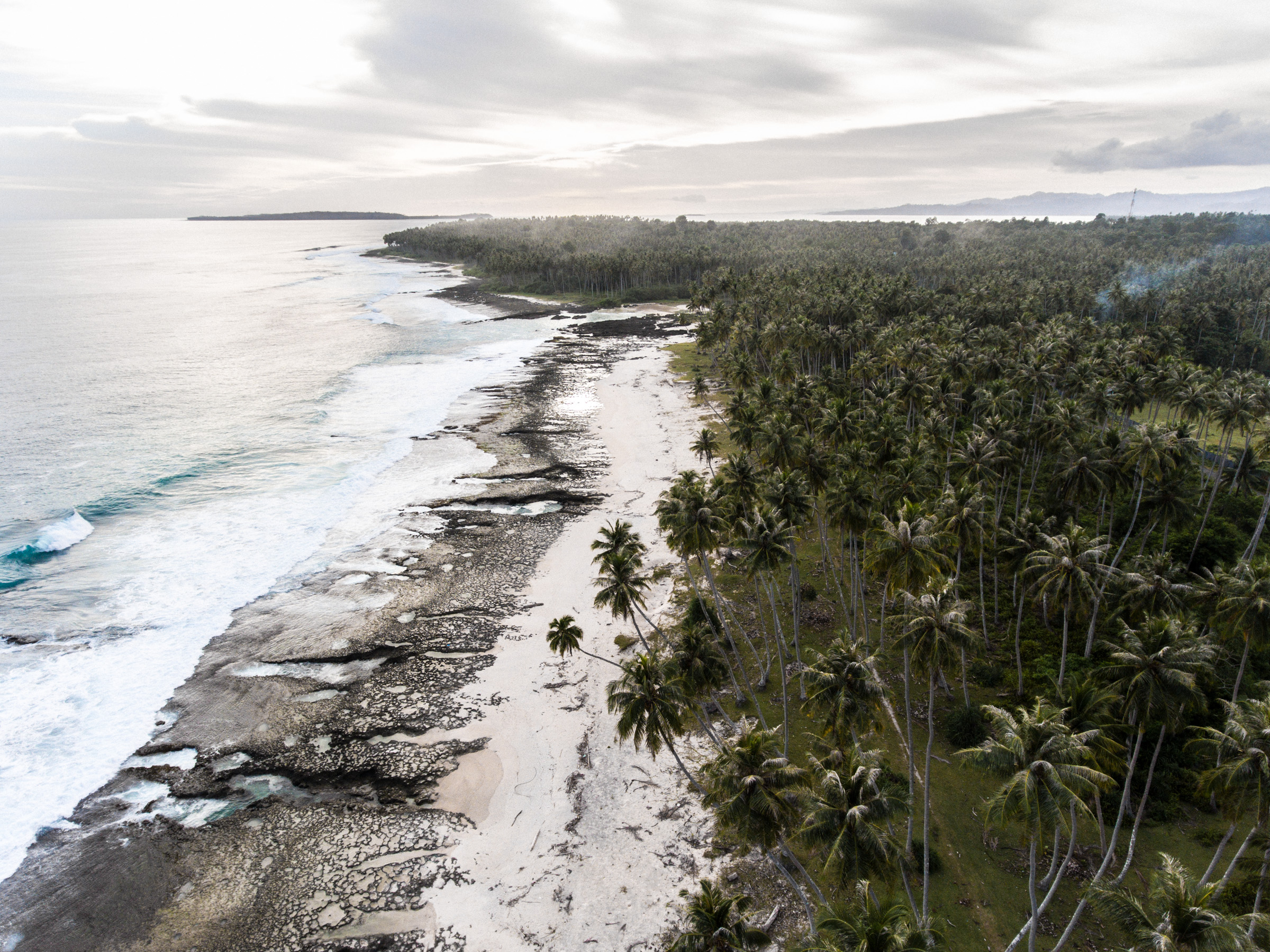 When comparing coconut vs. oil palm, biodiversity is one important factor

With coconut, there’s another factor – it produces more than oil. Milk, cream, water and activated charcoal are all coconut byproducts, all of which are growing in popularity in the U.S. and Europe. Oil palm produces, as its name says, basically only oil.

Then there’s the fact that coconuts, at least in Southeast Asia, grow primarily in mixed-use plantations. Visit coconut and oil palm plantations in the top of the top growing regions of Southeast Asia and you’ll notice several key differences. Oil palm is found in massive, industrial monoculture plantations. Even within smallholder farms are usually only growing oil palm, the evidence suggests it doesn’t grow well with other plants. Meanwhile, coconut farms, grown primarily by smallholders, are mixed with crops like banana, cacao, and coffee, and farmers then often integrate them with the surrounding tropical landscapes. Coconut plantations look and feel more natural than oil palm plantations.

Consumers: focus on how the product is grown

Of course, this is not universally true. The international campaign Palm Done Right is working with farmers to grow oil palm in mixed-use agroforestry settings in South America, incorporating regenerative agriculture. There’s also the Roundtable on Sustainable Palm Oil (RSPO), which has faced criticism in the past for allowing bad actors like Indofood to stay on as members long after its failure to uphold standards was made clear – but in fairness, the RSPO has learned. Its latest standards, released in 2018, are much stronger when it comes to halting deforestation, protecting peatlands, and respecting human rights. At this point, though, RSPO only accounts for about 19 percent of global palm oil, and Palm Done Right is a tiny niche player.

The truth is, as with most products, how it is grown and how it gets from the farmer to your dinner table or bathroom matters more than whether it not it's coconut oil or palm oil. While far too much palm oil is grown on plantations that are responsible for deforestation, human rights abuses, and illegal land grabs, some palm oil is grown more sustainably. Similar, if coconut is grown with the use of child labor, or, as is the case in part of Thailand, monkey labor, it’s likely not a better choice ethically, either.

What is needed is more demand, from brands and consumers, for ethical, traceable coconut oil. Thankfully, some brands are leading the way in creating a market for sustainable coconut oil, such as Lucy Bee and Harmless Harvest.

Lucy Bee, for example, is a United Kingdom-based seller of natural ingredients and gifts, many of which use coconut oil. The company saw what happened in the palm oil industry, and when it started sourcing coconuts, Lucy Bee said it wanted to ensure it was not just using another oil with the same, just less known, issues.

“We have seen the negative impact from other ingredients such as palm oil where it is used en masse and in huge demand causing deforestation, we do not want to see the same thing happen with coconuts,” said Lucy Buckingham, the founder of Lucy Bee, to TriplePundit. “When we were looking into selling coconut oil it was very important to us that we had complete traceability from plant to the shop floor.”

There’s no equivalent to the RSPO yet for coconuts, but groups like the Fair Trade Sustainability Alliance (Fair TSA) and the Rainforest Alliance are starting to scale up certification. Lucy Bee decided to work with Fair TSA, which ensures that a larger portion of the sales from coconut does directly to farmers.

“We went with Fair TSA due to the fact that the premium we pay for our crops goes directly back to the local communities,” said Buckingham. “They also have control over how the money is spent and there is complete traceability.”

Another brand taking a stand is Harmless Harvest, based in San Francisco. The company has become one of the largest sellers of organic coconut water – found on shelves in Whole Foods, Sprouts and numerous other supermarkets. From nearly the beginning, the company says it wanted to make sure that it was sourcing coconut water sustainably.

“We believe it is not a mutually exclusive concept for a company to both be successful and socially responsible,” said Heather Cutter, Harmless Harvest’s senior vice president of brand, innovation, and marketing to 3p. Harmless Harvest says it also sources 100 percent certified, traceable fair trade coconut water, and sees ethical sourcing as a winning business proposition. “We [aim] to be a driving force for positive and sustainable change for these farmers and communities, which ultimately means a better supply and quality of coconuts for our products.”

As more brands seek to expand into the coconut market, let’s not make the same mistake we made two decades ago with palm oil. Lucy Bee and Harmless Harvest show that there’s a better path – incorporating sustainability, traceability and farmer empowerment from the very beginning.

Editor’s note: This story was supported by a grant from the Pulitzer Center.

Nithin Coca is a freelance journalist who focuses on environmental, social, and economic issues around the world, with specific expertise in Southeast Asia.

With Electric Vehicles, Brand Reputation Is Not a Sure Thing

Oil Glut or Not, More Automakers Pivot to Hydrogen and EVs

Patagonia to Consumers: Repair and Recycle Your Garments

BMW Concept i4 Makes a Huge Statement on Electromobility

Not Just for Sushi: Seaweed is the Magic Ingredient for This Sustainable Packaging Startup