New York City startup Crisp launched last fall with an AI-driven demand forecasting platform that helps retailers and their suppliers reduce overstocking and cut down on food waste. Around 30 beta customers in industries such as meat, dairy and produce have already seen promising results from the tool, including fewer short orders and an 80 percent reduction in scrapped inventory, according to the company.

With its breadth of experience in forecasting, Crisp was well positioned to retool its services to help retailers cope with shifting consumer demands in the wake of COVID-19.

In late March, the startup launched a modeling tool that allows retailers to look at point-of-sale data from a European grocer to more accurately forecast U.S. purchasing trends. "Europe is a few weeks ahead of us, from the U.S. perspective," which means purchasing data from European retailers is indicative of what's to come for stores in the U.S., said Trevor Hough, VP of product for Crisp.

As you can see in the graph below, taken from Crisp's DemandWatch tool, purchasing surged in the days immediately following the announcement of Europe's stay-at-home orders. A week later, demand remained 30 to 250 percent higher than usual as people continued to stock up. "Then, for the most part, things went back to normal," Hough explained. "If you're a supplier, you can take a look at this and marry it with … your own data in order to be better prepared for either an influx or a drop in demand." 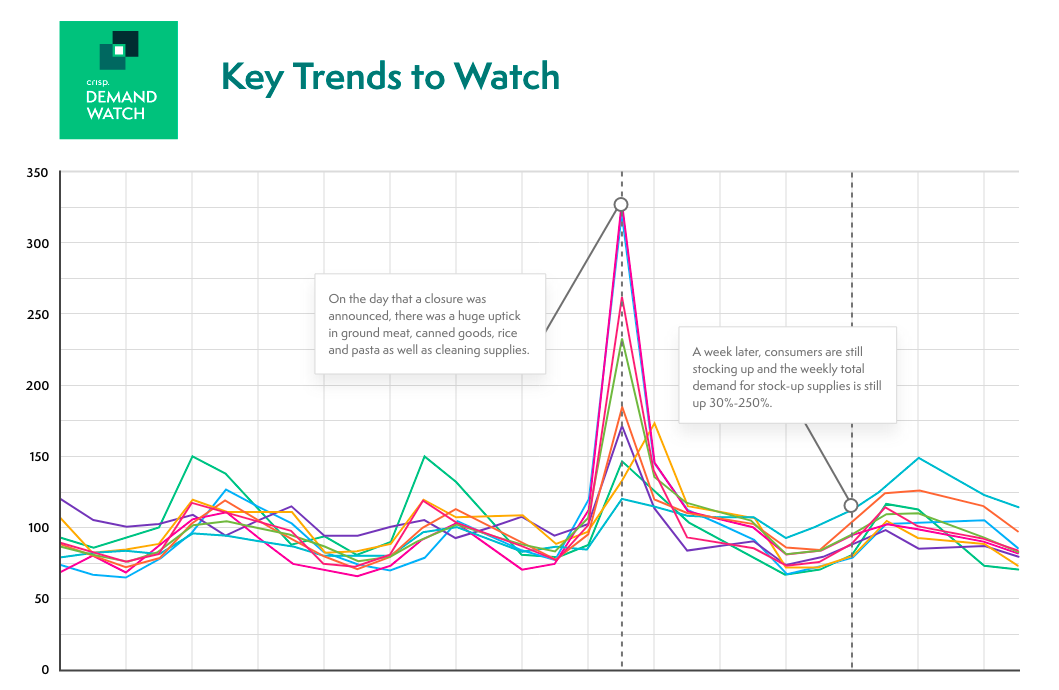 (Image: This chart shows demand for grocery essentials, such as cleaning supplies, canned goods, rice, pasta and ground meat, before, during and after the announcement of Europe's stay-at-home orders. Click to enlarge.)

Mitigating the 'bullwhip effect' in the wake of COVID-19

Crisp's food waste reduction tool largely centers on a supply chain theory known as the bullwhip effect. First identified by a trio of Stanford professors and published in MIT's Sloan Management Review in 1997, the theory likens inaccurate information passed through the supply chain to the flick of a bullwhip in a person's hand: A small movement at one end creates larger and larger ripples in the other direction.

When it comes to supply chains like the food system, the theory dictates that a small inaccuracy in consumer demand forecasting — plus or minus 5 percent — can result in companies further back in the chain thinking demand has increased or decreased by up to 40 percent. "A slight ripple on the consumer side — which is in the retailer — can create huge, cascading impacts at other areas in the supply chain," Hough told us.

Under normal circumstances, the result is food being left in the field to rot or companies carrying overstock that's ultimately scrapped, leading to roughly a third of the global food supply going to waste each year. But in extraordinary times such as these, the effects can be even more damaging.

As suppliers dramatically over-order or over-produce in response to inaccurate forecasts, many will be left with stock they can't sell as demand returns to normal — leading to a massive financial hit and, particularly in the case of perishable goods, a whole lot of waste. Wasted food becomes particularly heartbreaking amidst the COVID-19 pandemic, as millions find themselves out of work and photos of miles-long food pantry lines go viral on social media.

Accurate data can push back against the problem and ultimately ensure food ends up where it's needed, Crisp's team says. "Global events like COVID-19 heighten the interconnectivity of our food supply chain," said Are Traasdahl, co-founder and CEO of Crisp. “Having this data available and knowing that U.S. behavior is following European behavior at a two- to four-week time span is critical for U.S. grocers and food manufacturers as they try to predict demand for categories of food and grocery products, restock shelves, and meet the needs of citizens.”

The consumer-to-supplier time lag can be up to four months, Hough explained further. "So, the demand spike we’re seeing won’t actually hit a supplier for 12 to 16 weeks, which is why this is so critical: The more advanced information you can give to a supplier, the more accurately they're able to respond to it."

Crisp's DemandWatch data model, which can be filtered by product category down to the store level, is updated in real time and is free to grocers, retailers, suppliers, brokers, distributors, CPG manufacturers and other organizations along the supply chain.