(Image: Incentivizing the use of reusable cups like this one is just one way Starbucks hopes to become "resource positive.")

Starbucks plans to halve carbon emissions, water use and waste by 2030 as part of a long-term vision to become a "resource positive" company.

CEO Kevin Johnson laid out the plan in a letter released today and addressed to Starbucks employees, customers and other stakeholders. "Our aspiration is to become resource positive—storing more carbon than we emit, eliminating waste and providing more clean freshwater than we use," Johnson wrote.

The coffee giant will conduct market research on factors related to its 2030 goals and formalize those targets in 2021—its 50th year in business—based on lessons learned. "As we move forward, we will be transparent in reporting short- and long-term progress against our goals," Johnson promised stakeholders in his letter.

Last year, Starbucks worked with the World Wildlife Fund (WWF) and Quantis to assess the carbon emissions, water use, and waste associated with its operations and supply chain. This was the first time the company conducted a footprint assessment for all three of these areas globally—and the findings informed both its 2030 goals and its long-term vision, Rebecca Zimmer, Starbucks' global director of environment, told TriplePundit.

"The findings from that audit drove us to where we had our biggest areas of opportunity, as well as the challenges we needed to solve for," Zimmer said. "It was also very informative in terms of what strategies could be deployed."

Using benchmarks from the analysis, Starbucks identified five long-term strategies that will underpin its resource positive vision. These tactics include expanding plant-based menu options, switching from disposable to reusable packaging, and investing in regenerative agriculture, forest conservation and water replenishment, Johnson detailed in his letter.

Environmental groups praised this long-term trajectory in testimonials gathered by Starbucks and distributed to reporters. “It is encouraging to see Starbucks embrace a data-driven and team-driven approach to creating a resource positive future," Mark Lee, executive director of the environmental consultancy SustainAbility, said in a statement. "Their most senior leadership was directly involved in the creation of this plan."

"This is exactly the kind of leadership we need to see from businesses—an opportunity to invest in their own future while making their global customer base a partner in this sustainability journey," added Sheila Bonini, senior vice president of private-sector engagement for WWF.

Starbucks' commitment to halve global carbon emissions by 2030 aligns with the Paris climate agreement, and the company will use Science-Based Targets initiative (SBTi) methodology to measure progress moving forward.

"We agree with the consensus of scientific experts who note that without drastic action from everyone—governments, companies and all of us as individuals—adapting to the impact of climate change in the future will be far more difficult and costly," Johnson wrote.

The target builds on Starbucks' prior track record of setting forward-thinking goals and sticking with them, he asserted. For example, the company worked with Conservation International for nearly two decades to ethically source 99 percent of its coffee through C.A.F.E. (Coffee and Farmer Equity) practices. Reaching this milestone "more than halved what our coffee’s carbon footprint would have been otherwise," Johnson wrote.

Under a 2018 commitment, Starbucks pledged to build 10,000 so-called "Greener Stores" by 2025. In this case, the company defines "greener" as a store that's powered by 100 percent renewable energy and uses 30 percent less water than its conventional counterparts, among other factors.

A $1 billion green bond launchd in May 2019 will fund further efforts toward the 2030 water goal, as well as other sustainability efforts at the company. 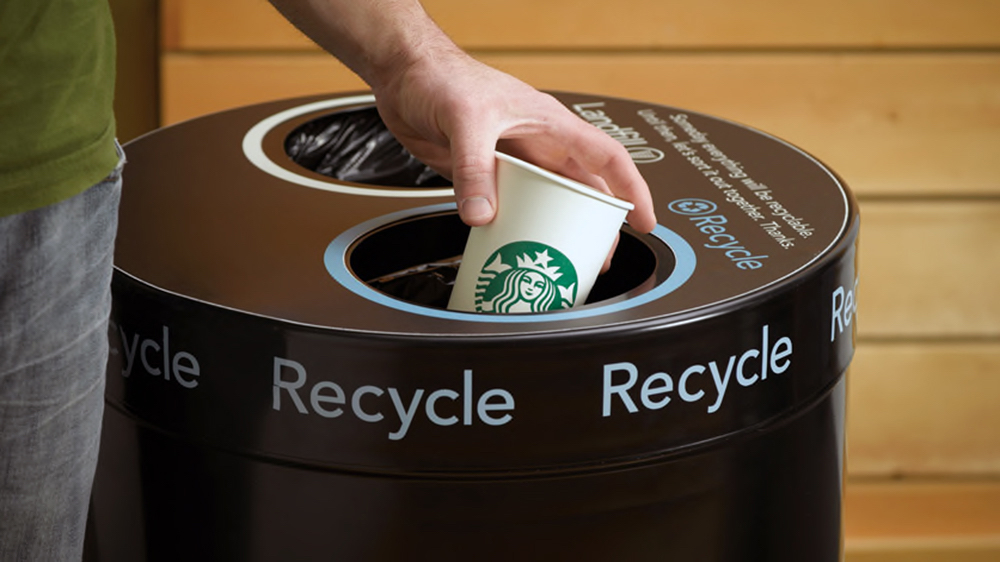 Waste: An Achilles heel, or an opportunity for engagement?

Starbucks fell short of an ambitious 2008 recycling goal that was "largely dependent on radical changes in customer behavior," underscoring "the need for a different approach," Johnson wrote. This will be a key focus of market research and trials in 2020. Specifically, the company is looking to "better understand consumer behavior and incentives to encourage consumer use of reusable containers," he continued.

The company joined the Ellen MacArthur Foundation's New Plastics Economy Global Commitment as part of today's announcement, which requires signatory companies to make all packaging reusable, recyclable or compostable by 2025.

Some trials are already underway—including a takeaway cup fee implemented in the U.K. in 2018 and set to expand to Germany this year. Starbucks stores are also using more ceramic cups for beverages consumed in house, particularly in markets like Europe and the Asia Pacific, where customers are more likely to linger than take their drinks to go, Zimmer said.

"There will be different models, and the consumer and market research we're doing will help us inform how best to succeed alongside our customers in this journey," she told us.

Starbucks is one of several companies to release environmental announcements ahead of the World Economic Forum in Davos, Switzerland, later this week. Visa achieved its goal to use 100 percent renewable energy. PepsiCo plans to do the same for its U.S. operations by the end of this year. And Microsoft pledged to become “carbon negative” by 2030, among other news.

For his part, Johnson underscored that Starbucks is still committed to a long-term growth model anchored by double-digit increases in earnings per share, with a clear inference that environmental strategies will help—not hurt—that vision.

"By embracing a longer-term economic, equitable and planetary value proposition for our company, we will create greater value for all stakeholders," he wrote. "The journey we undertake is not only the right one for Starbucks' responsibility as a corporate citizen of the world but is also fundamental to our brand relevance and, therefore, our overall business results."

Are More Carbon Footprint Labels Coming to the Grocery Store?