Stories unite us, inspire us and persuade us, and this month one of the biggest modern storytellers is betting on the power of story to move the world to action. Ahead of the COP26 climate talks in Glasgow, Netflix released a new curated collection of television shows, documentaries, and movies aimed at instilling an appreciation for nature and galvanizing action to protect it.

Launched in partnership with COP26 organizers, Netflix's “Together for Our Planet” collection includes 30 titles that help viewers better understand what's happening to the planet. "You don’t have to be a world leader to be part of the solution, which is why the people behind COP26 teamed up with Netflix to create this collection," the company wrote in a press statement.

The collection includes documentary films depicting the beauty of nature and the severity of climate change, such as the Oscar-winning “My Octopus Teacher," David Attenborough's "Breaking Boundaries" and the Netflix original "Our Planet," along with some others you may not expect. Nature-oriented television series like the cult Norwegian favorite "Ragnarok" and the Colombia-based thriller "Green Frontier" also appear in the collection, alongside the sustainability travelogue series “Down to Earth With Zac Efron” and family favorites like "Penguin Town" and "The Lorax." The streaming service is also making select titles available to non-Netflix members on YouTube.

"I hope this collection of stories on environmental and climate action inspires even more people, and their leaders, to take action as the world gathers together for the COP26 climate summit in Glasgow," Alok Sharma, COP26 president-designate, said of the collection in a statement. 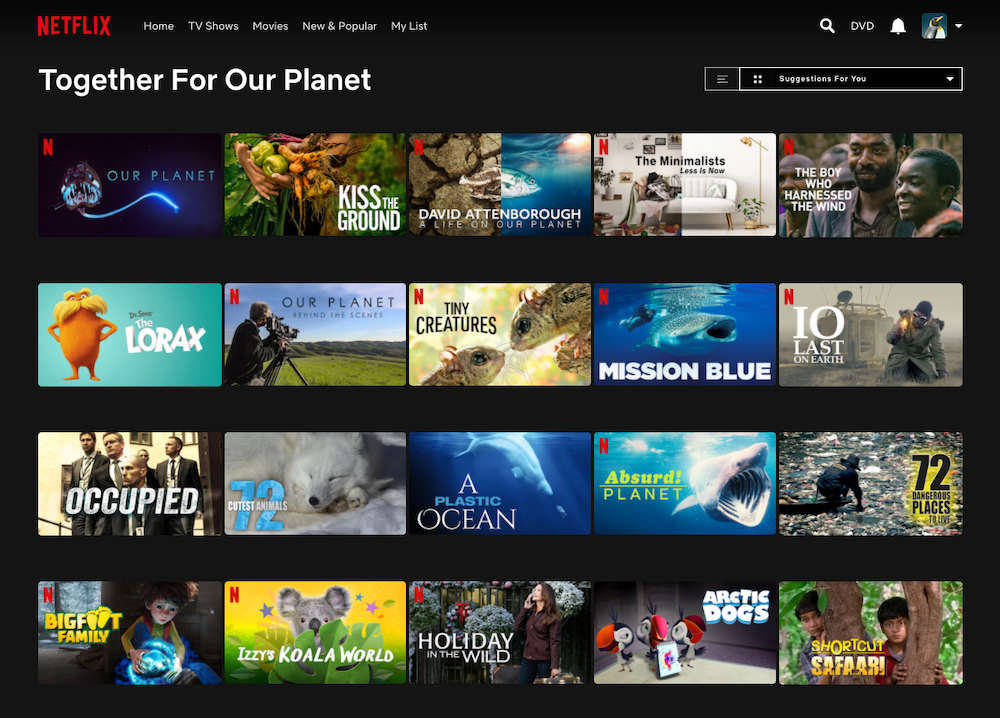 COP26 is set to be the most pivotal U.N. climate negotiations since the Paris Agreement was adopted in 2015. Many experts are calling it our "last, best chance" to tackle the climate crisis.

But a number of issues threaten to strain the talks — from concerns that vaccine inequity will hinder the participation of vulnerable countries, to fears that its ultimate aim to rally national commitments that will halve global emissions by 2030 won't be realized.

As challenges mount, increasing public awareness of the climate crisis and the need for an equitable response can only be a good thing, and Netflix offers a massive megaphone and a potentially receptive audience. Around 160 million households watched sustainability stories on Netflix last year, according to the company, and viewers seem keen to see more. In a recent Netflix-sponsored research study across 16 countries, three out of five people (62 percent) said they’re "very interested" in watching shows and movies that touch on climate issues.

Netflix has big climate action plans of its own

Netflix is well on the way to being a climate action leader in its own right. The company is targeting net zero greenhouse gas emissions by the end of next year through its Net Zero + Nature initiative.

Last month as part of a special climate action edition of the 3BL Forum: Brands Taking Stands — LIVE!, we sat down with Netflix's first sustainability officer, Emma Stewart, to learn more about the company's aggressive push toward net zero and how others can follow suit. In case you missed it, you can check it out here.