The Carbon Footprint of Pakistan is Small, but Climate Change Effects on The Country are Catastrophic

The Kalam region of Pakistan is home to many glaciers — and they are disappearing fast.

More than one-third of Pakistan is now underwater as the country faces catastrophic flooding. At least 1,300 people have died, a third of which are children, and the death toll is expected to rise. The floods were partially caused by both an intensified monsoon season with increased rainfall, and glacial melt, fueled by a drastic increase in temperature causing glaciers and snow to melt rapidly.

Pakistan has more glaciers than any other area outside of the polar regions. Rising temperatures are causing them to melt and the glacial runoff is rapidly entering waterways already swollen from the monsoon rains. The resulting floods have been disastrous. Snow and ice from Himalayan glaciers are melting at a rate at least ten times faster than the average rate in previous centuries. Additionally, 2022 brought about the highest levels of rainfall that Pakistan has seen in decades, more than 780 percent higher than average. More than 20 dams have been breached in the country this year.

Additionally, some of the flooding in Pakistan has been the result of a phenomenon known as “glacial lake outbursts.” In high altitudes, water from glacier melt can form lakes inside of the ice. When there is too much water added to these lakes too quickly, through runoff or rainfall, the ice holding in the water can burst, causing dangerous and extreme floods. Pakistan averages about six glacial lake outbursts annually, but the country has already seen at least 12 this year.

Who should pay for climate disasters?

Pakistan is disproportionately affected by climate change relative to its contribution to the problem. The country emits a miniscule fraction of the world’s greenhouse gas emissions, leading Pakistani authorities to question who should foot the bill for climate disasters. At the 2009 U.N. summit in Copenhagen, leaders of wealthy nations pledged to funnel $100 billion annually to less-wealthy nations, including Pakistan, by 2020 to help them adapt to climate change. $100 billion would not have come close to covering the full cost of climate adaptation, which is estimated to be in trillions of dollars; in any event, wealthy countries have since backed out of even this commitment. Now, Pakistan is asking wealthy nations to fulfill the pledge they made more than ten years ago and provide funding for lower-income nations to adapt to climate change.

Aamir Khan, Deputy Permanent Representative of Pakistan to the U.N., said, “Developing countries, whilst not responsible for the majority of emissions today, too often bear the brunt of climate change impacts. The specific challenges faced by the developing countries in climate change must be recognized.” Pakistan has emitted approximately 0.4 percent of the world’s carbon dioxide emissions since 1959, compared to 21.5 percent by the United States.

Pakistani authorities have issued an emergency appeal for humanitarian aid as the death toll is expected to continue rising. Current estimates show that the floods have destroyed almost 1,900 miles (more than 3,000 kilometers) of roads, 130 bridges and almost half a million homes. Officials are already worrying about food insecurity as approximately 800,000 livestock were killed and more than 4 million acres of cropland have been damaged. Government officials estimate that over half of the country’s crops have been washed away, as they brace for a food shortage.

Some western leaders are calling for high carbon-polluting countries to cover the cost of climate change-related damage and future adaptations in lower-income and low carbon-emitting countries. British Member of Parliament Claudia Webbe wrote on Twitter, “Pakistan is responsible for 1 percent of global emissions. It’s completely wrong that it has to bear the brunt of climate change. The super rich caused the climate crisis. The super rich should bear the cost.” 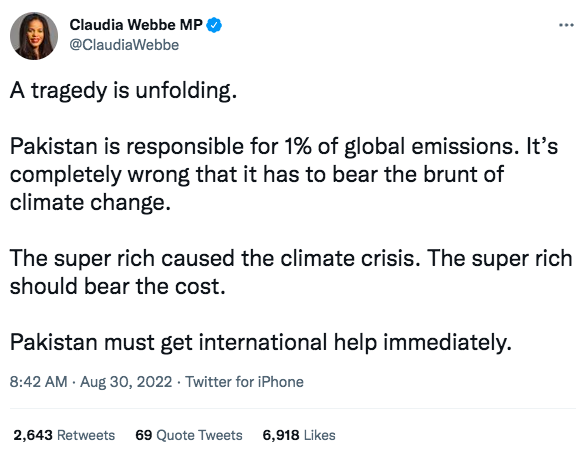 The U.S. is historically the largest carbon polluter in the world, which is the leading cause of climate change, but the U.S., Australia and other wealthy countries oppose payments.

Current estimates indicate that the economic cost of the current disaster in Pakistan is approximately $10 billion. The UN is working to coordinate an international humanitarian response, but so far, the U.S. has pledged only $30 million to relief efforts.

Pakistan’s future on a warming planet

Pakistan will become increasingly vulnerable to climate disasters as temperatures continue to rise, unless the world cuts emissions drastically and immediately. The world is currently experiencing 1.2 degrees of warming, and is on track to rise to more than two degrees Celsius. Even if the world limits global warming to 1.5 degrees Celsius, a third of Pakistan’s glaciers would still likely melt. And, warming temperatures due to climate change are making extreme rainfall events more frequent.

U.N. Secretary General Antonio Guterres is sounding the alarm and urging countries to aid in relief efforts in Pakistan. In a video statement he said, “The Pakistani people are facing a monsoon on steroids — the relentless impact of epochal levels of rain and flooding. Let’s stop sleepwalking toward the destruction of our planet by climate change. Today, it's Pakistan. Tomorrow, it could be your country. As we continue to see more and more extreme weather events around the world, it is outrageous that climate action is being put on the back burner as global emissions of greenhouse gasses are still rising, putting all of us — everywhere — in growing danger.”

Mary Riddle is a writer and sustainability consultant based in Florence, Italy. As a former farmer and farm educator, she is passionate about regenerative agriculture and sustainable food systems. Currently, she and her husband also own and operate Italy in Season, a subscription box company with a mission to support small-scale Italian artisans and traditional craftsmanship.