The Solar Workforce Is Mostly White and Male: Industry Calls For a Change

The U.S. solar workforce has grown by 159 percent since 2010, adding nearly 150,000 jobs, according to the Solar Foundation, a nonprofit, nonpartisan organization focused on solar technologies. Even as solar jobs continue to grow faster than the U.S. economy, new research indicates that workers in this burgeoning sector are still overwhelmingly white and male. The overall solar workforce is 73 percent white, and women and gender non-binary people make up less than 28 percent of solar workers.

That's according to a new diversity and inclusion (D&I) study from the Solar Foundation and the Solar Energy Industries Association (SEIA), a trade association for the U.S. solar sector.

While data shows that more solar companies are making diversity a priority, it's clear there's much more work to do. In response, the organizations released a D&I best practices guide to help companies in the industry build their diversity and inclusion programs. They also kicked off the SEIA's #DiversityChallenge on Monday, calling on companies to improve their D&I efforts and make sure everyone achieves equal access to the solar job boom.

“I felt it was important to make this a public issue—to challenge others to stand up and account for the work they are doing,” Abigail Ross Hopper, SEIA’s president and CEO, said in a statement. "We need to take account of our own actions and ask ourselves, are we doing enough? It’s imperative that we take proactive steps to advance these issues, because it isn’t going to happen on its own.”

The gender pay gap is even greater in solar than in the broader U.S. workforce: Female solar workers make 74 cents on the dollar compared to men, while the average woman worker earned 85 percent of what men earned last year, according to the Pew Research Center.

Disparities only grow further up the managerial chain: Among all senior executives reported by solar firms, 88 percent are white and 80 percent are men, according to the report. This white- and male-dominance in solar C suites again mirrors the U.S. economy overall—only 25 companies in the Fortune 500 have a woman CEO. Only two Fortune 500 firms are helmed by women of color, and black women make up less than 2 percent of middle managers in the Fortune 500.

In the solar sector, workers appear to recognize the glass ceiling above them: While 52 percent of men in the industry feel they have successfully moved up the career ladder, only 37 percent of women said the same, according to the report.

As employment opportunities in the sector continue to grow, addressing these gaps will become all the more important. “The boom of solar jobs is a monumental and promising time for our economy and our environment,"  A.Tianna Scozzaro, director of the Sierra Club’s Gender Equity and Environment program, a parter on the report, said in a statement. "We have an opportunity to make equity and inclusion the foundation of a clean energy workforce."

In their report, the Solar Foundation and SEIA identified several factors at play—and how companies can improve. "Solar companies tend to rely on personal or professional networks in hiring, but this may limit their ability to recruit diverse candidates," the organizations warned. Only 28 percent of black, Hispanic and Latino employees found their jobs through a referral or by word of mouth, compared to 44 percent of white employees, according to the report. “As leaders, we have a responsibility to create cultural change and address the systemic forces that have allowed discrimination to fester," said Ross Hopper of SEIA.

Additionally, the majority of solar companies do not formally track employee demographics and diversity—and, as is often said, you can't manage what you don't measure. Still, the organizations noted some improvements in this area: 36 percent of solar companies now track demographic data, compared to 27 percent in 2017.

“You can’t change what you can’t see," Erica Mackie, CEO and co-founder of GRID Alternatives, a nonprofit focused on providing solar power to underserved communities, said in a statement. "Accounting for gender and racial inequities within the solar industry with a study like this is the first step.”

And it's a step the industry must take—not only for the sake of social equity, but also to ensure its own success. Studies show that companies with ethnically and gender diverse workforces consistently outperform their peers on profitability. And in technical industries like solar in particular, diversity is key to maintaining a steady talent pipeline: "In today’s tight labor market, 26 percent of solar companies said it was 'very difficult' to hire qualified workers in 2018, an increase from 18 percent the previous year," the report revealed.

“A more diverse solar industry will be a more successful solar industry," Melanie Santiago-Mosier, senior director of the access and equity program at Vote Solar, an advocacy organization for solar policies, said in a statement. “The solar industry is aiming to completely transform the way our economy is powered and avert a looming climate crisis, and it will take people of all genders, races, and life experiences working together to successfully build that brighter future for our children and grandchildren.” 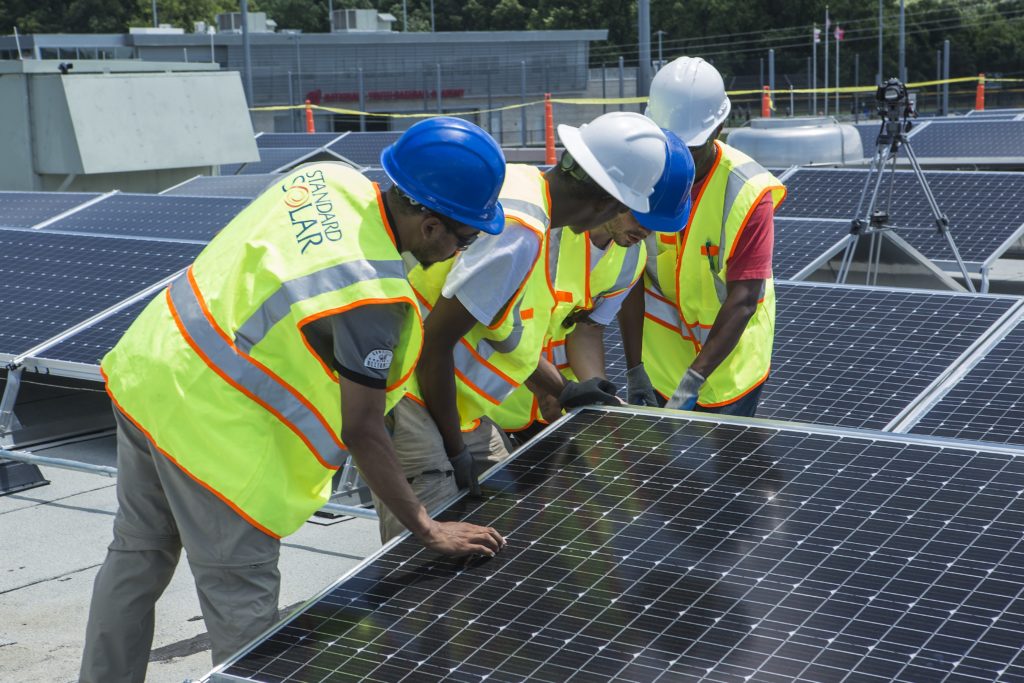 Increasingly, this potential talent pool also includes displaced fossil fuel workers, as companies and organizations across the U.S. look to retrain skilled oil, gas and coal technicians for jobs in renewable energy. “There have been a lot of programs to retrain workers,” Robert Godby, director of the University of Wyoming’s Center for Energy, Economics and Public Policy, told the U.S. Green Building Council. “In renewables, you can enter the industry as a technician, through manufacturing, or through installation and construction. All of those things are happening. In different regions, there are different opportunities.”

The Solar Foundation-SEIA study shows that the solar sector is generally a positive place to work: 73 percent of respondents agreed their firm cultivates a culture of respect, equity and positive recognition of differences. But as this sector continues to expand, pressure to ensure everyone is getting an equal opportunity to participate will only grow.

Already, proponents of versions of the Green New Deal are pushing for climate action in tandem with equitable economic and employment policies. And this industry push—coming from a trade group, which often serves as the broader voice for any sector—raises the bar for solar companies. The only question that remains is whether they will rise to the occasion.

“There are many exciting job opportunities in America’s growing solar industry, and these jobs should be accessible to all,” said Andrea Luecke, president and executive director at the Solar Foundation. “Given the importance of the solar industry in building the energy infrastructure that is needed to confront the challenge of climate change, the solar industry has a tremendous opportunity to serve as a diversity and inclusion workforce model for the wider economy.”