Bossy. Aggressive. Pushy. Cold. These are just some of the terms used to describe women in the workplace, according to Catalyst, a global nonprofit that works with CEOs to build gender equality. To mark International Women's Day (March 8) and Women's History Month, the 48-year-old organization is reprising its successful #BiasCorrect campaign — which aims to reclaim the power of words to fight unconscious gender bias.

#BiasCorrect launched around this time last year, featuring images of influential women emblazoned with biased terms used to describe them in the workplace. (Both Facebook COO Sheryl Sandberg and former Secretary of State Hillary Clinton were once labeled "bossy" by their coworkers, in case you were curious.)

Catalyst and its campaign collaborator, women-led brand strategy firm Burns Group, invited women on social media to share their own experiences with gender-biased language using a photo generator that placed their experiences alongside famous women. 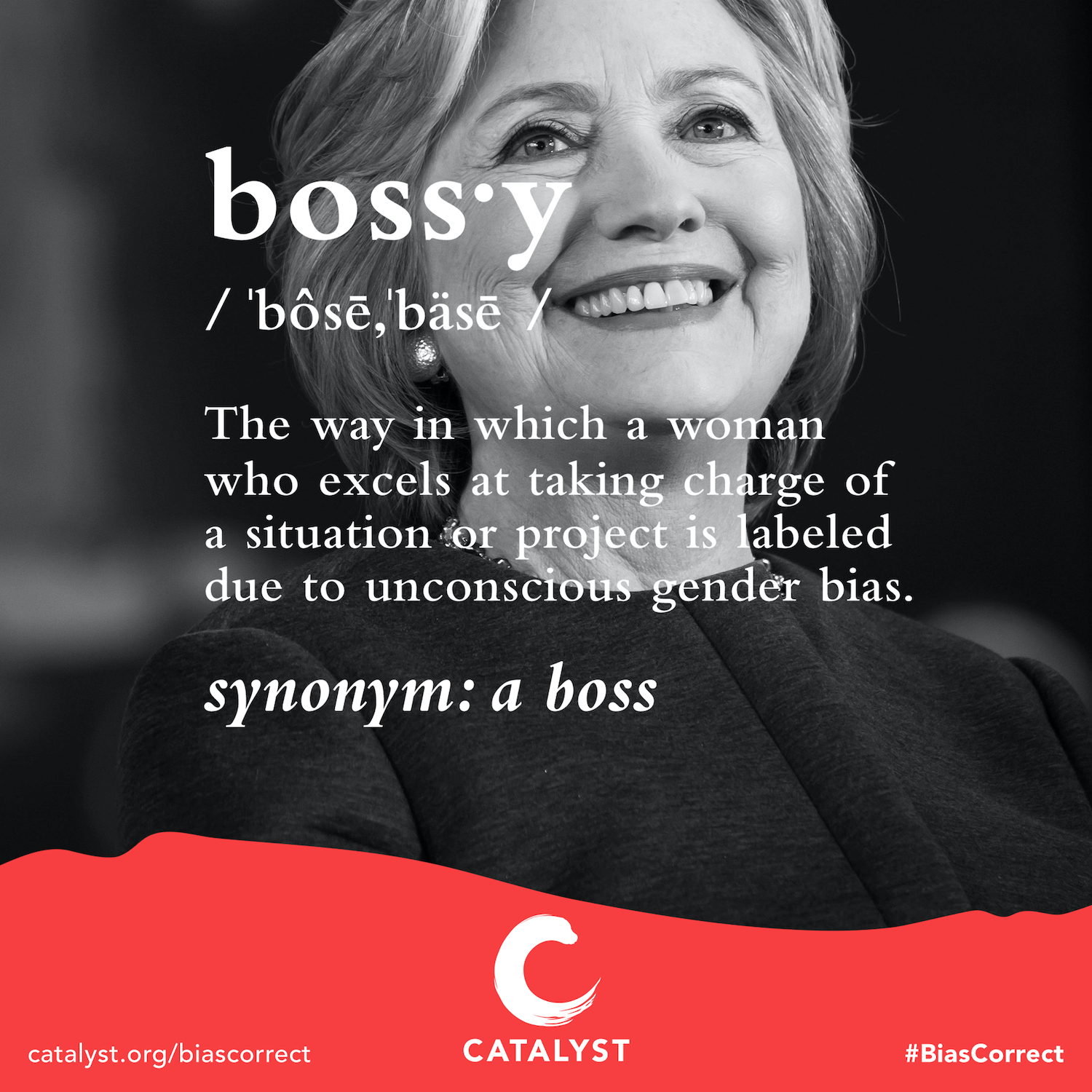 The response was overwhelming. The #BiasCorrect hashtag generated more than 32 million impressions on Twitter, and the 2019 campaign reached more than 188 million people across six continents, according to Catalyst estimates. 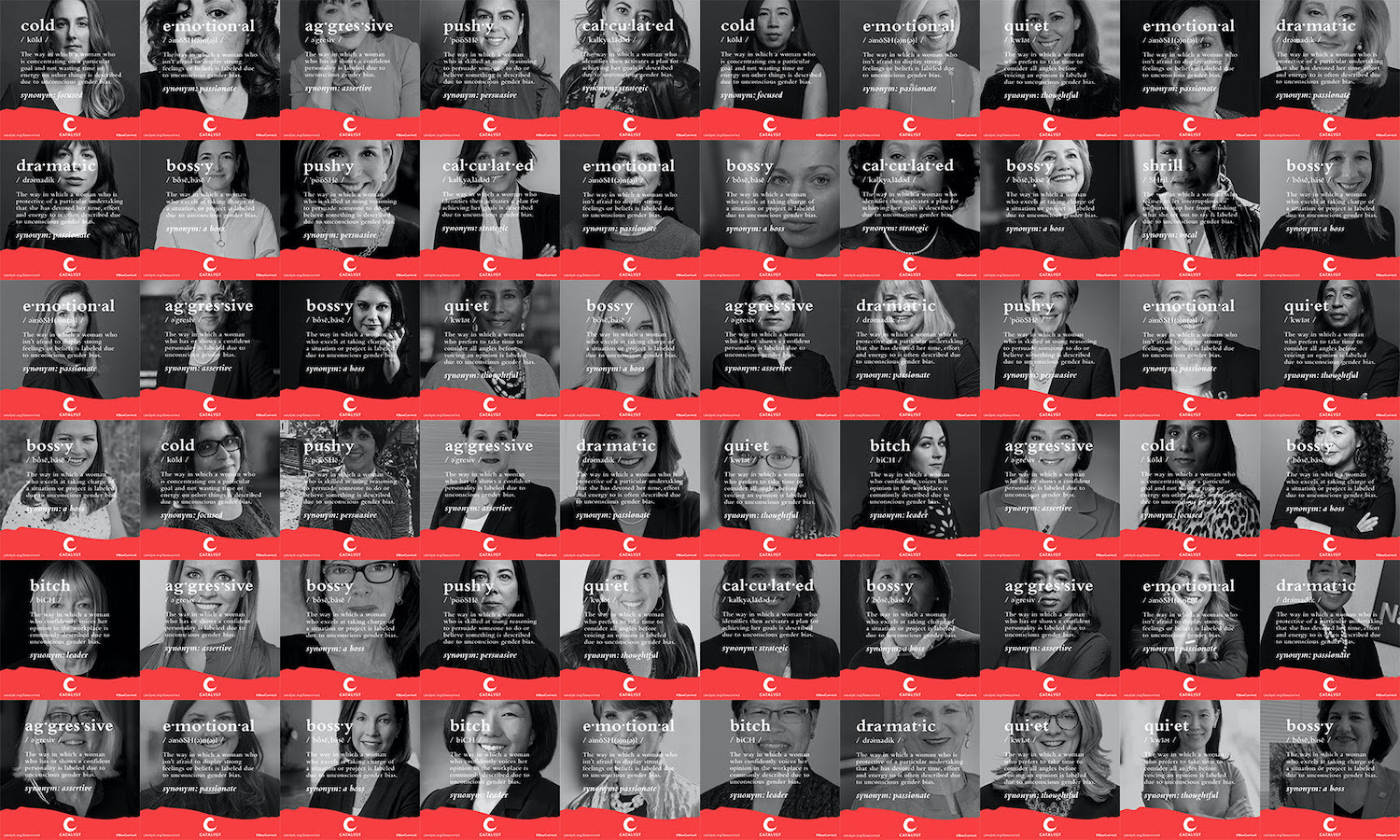 Some women recalled being labeled as "calculated" and "shrill," while others were dismissed as "quiet" or "emotional."

The lose-lose dichotomy between too forceful and too timid echoes the reality that is often described by researchers examining women's experiences at work. Catalyst's own surveys document the prevalence of micro-aggressions and gender-biased language in corporate workplaces, particularly for women of color, who say they feel constantly "on guard" and hyper-aware of how they are perceived by coworkers.

Along with visuals that turned these misconceptions on their head, the 2019 iteration of #BiasCorrect included a plugin for the instant-messaging platform Slack, which spots bias in word choices and suggests alternative terms. In the 12 months since, nearly 300 organizations have downloaded the plugin.

In 2020, this fight against gender bias enlists men

Following the runaway success of the 2019 campaign, this year's iteration of #BiasCorrect has the potential to be even bigger, thanks to a call-to-action specifically geared toward men.

"The response to last year's #BiasCorrect campaign confirmed that many people are unaware of the impact of unconscious gender bias in the workplace," Lorraine Hariton, president and CEO of Catalyst, said in a statement. "We knew it was important to continue to educate everyone about how language affects inclusion."

As women continue to use the #BiasCorrect photo generator to share how their roles, skills and potential are described at work, this year men are invited to do the same. The aim is to illustrate how women and men with similar skillsets are often described very differently, creating barriers that prevent women from advancing in their careers or feeling accepted and appreciated at work.

The Slack plugin is also available in three additional languages for 2020, French, German and Spanish, and it's available as an open-source code that can be adapted for other messaging platforms.

"We know the problem isn't fixed, and we're engaging men as gender partners in our 2020 #BiasCorrect campaign to interrupt bias and help women advance," Hariton said. People are already responding, and Catalyst started to circulate side-by-side comparisons on social media over the weekend. 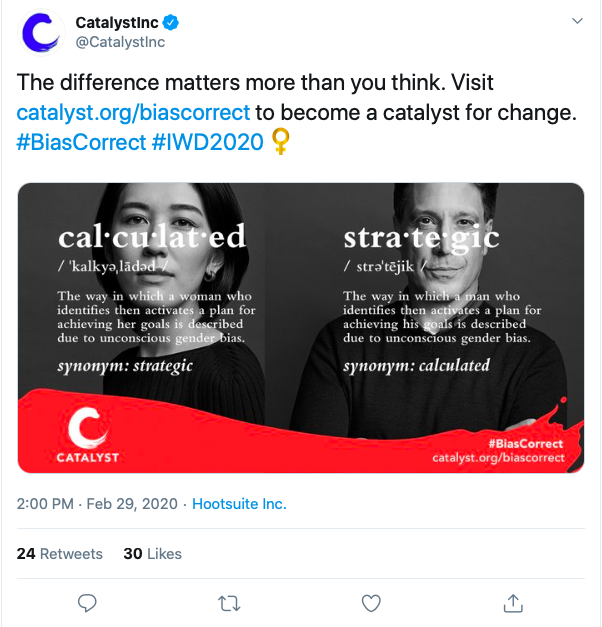 On the surface, it may seem as if women are the only ones negatively impacted by gender bias in the workplace, but research indicates that's simply not the case. "It's an unfortunate truth that gender bias is universal," said Joanne McKinney, CEO of Burns Group.

Studies show men are often penalized for straying away from masculine gender norms at work. When male leaders ask questions, for example, they're more likely to be perceived as incompetent compared to their female counterparts. When they advocate for their teams, they're more likely to be perceived as weak. One study even shows that men who are nice to their coworkers earn almost 20 percent less on average. What in the patriarchal hell.

But, if the initial response to the #BiasCorrect campaign is any indication, men are all too willing to join the conversation — and to start asking more questions about why we tend to be so rigid about who and how our coworkers should be. And that's good news for all of us.

Visit the #BiasCorrect website to learn more and to browse bias-busting resources for both men and women.