(Image: Face masks come off the assembly line at a Ford plant in Michigan, part of the company's efforts to retool in response to COVID-19.)

When it comes to corporate action in the face of a global crisis, it's one thing to write a check. Monetary donations are surely helpful for the nonprofits and community groups being pushed to the brink by the coronavirus pandemic, but most consider payouts in the millions of dollars as table stakes moves for multibillion-dollar companies.

A smaller group is going further by getting creative to retool their operations, supply chains, people and products to produce critical supplies needed by those on the front lines. This is by no means a comprehensive list, but these 15 companies stood out to us over the past six weeks.

Soon after the crisis hit, fast-fashion giant H&M began rearranging its supply chain to source and produce protective equipment for healthcare workers on the front lines. The first round of 100,000 face masks was delivered to Spanish and Italian hospitals two weeks ago, and an H&M supplier is in the process of producing 1 million long-sleeve, protective aprons for Swedish hospitals, the company wrote on LinkedIn.

While ramping up production of its N95 respirator masks, Honeywell is temporarily shifting operations at two chemical manufacturing plants to produce hand sanitizer. Sites in Muskegon, Michigan, and Seelze, Germany, will produce sanitizer over the next two months for donation to the U.S. Federal Emergency Management Agency (FEMA) and Germany's Saxony Ministry of Health, Social Affairs and Equality, according to the company.

Los Angeles-based sustainable fashion brand Reformation connected with Mayor Eric Garcetti to form LA Protects, an effort to mobilize local manufacturers to make 5 million face masks for use in the city. The indie brand converted its LA factory to produce masks using fabrics from its nearby warehouse, and it's recruiting other garment manufacturers in the city to do the same.

As is generally the case on this list, the masks are not medical-grade and are meant to be used by individuals, patients, workers in essential sectors and non-medical staff in hospitals, according to LA protects. The initiative partnered with Kaiser Permanente to develop design specifications to ensure the non-medical masks are effective for their purposes. Reformation, in particular, is focusing on homeless shelters. 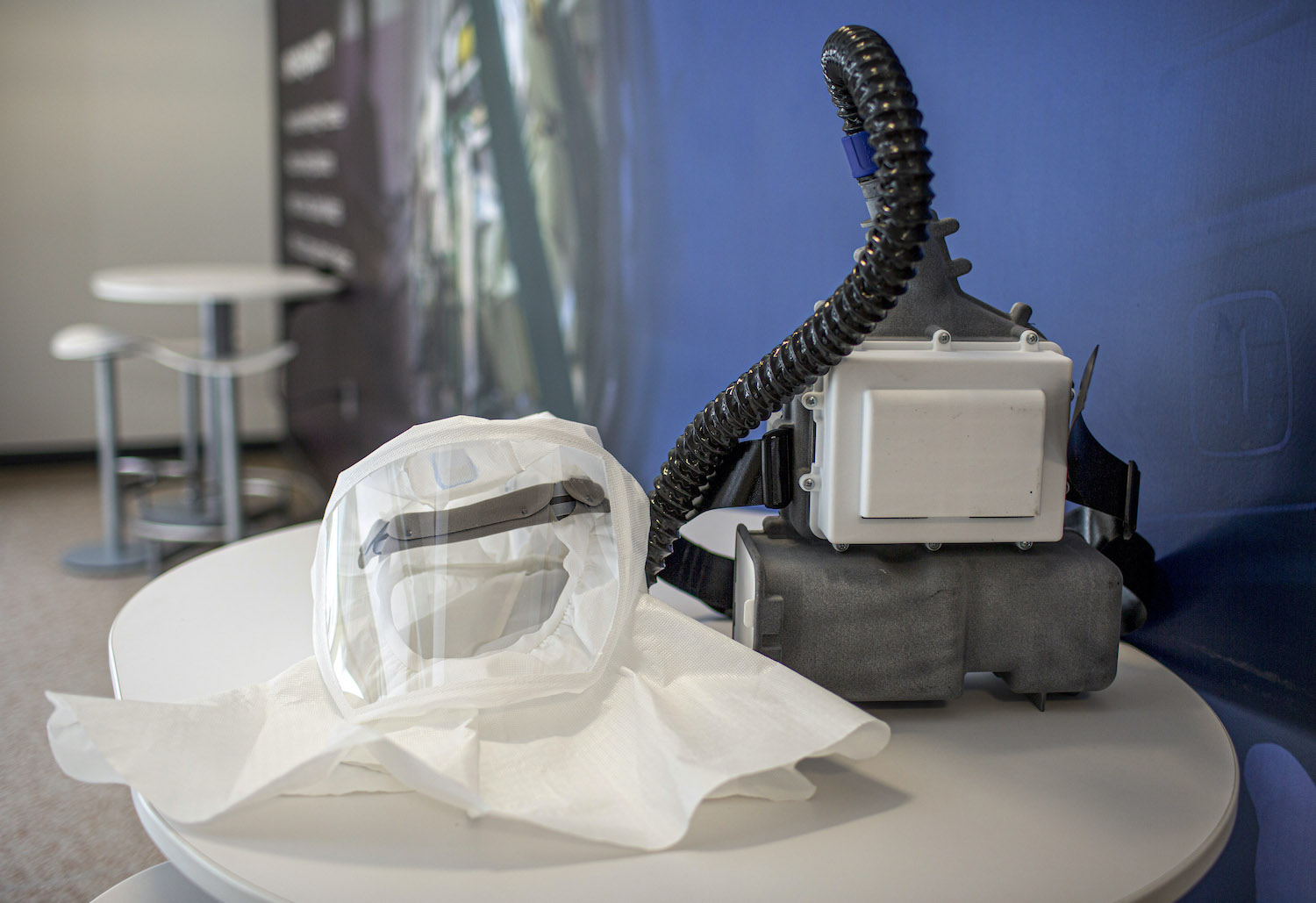 (Image: The powered air-purifying respirator (PAPR), designed by Ford in collaboration with 3M.)

Ford is partnering with 3M to produce medical equipment on its auto assembly lines. The automaker designed what it calls a powered air-purifying respirator, or PAPR, which fits over the face and provides filtered air for up to eight hours, allowing healthcare staff to work in contaminated environments without fear of contracting the virus.

Paid volunteers from the United Auto Workers union (UAW) are assembling the respirators at Ford's plant near Flat Rock, Michigan, using modified auto parts such as rechargeable batteries and fans from the Ford F-150. The plant has the capacity to produce 100,000 of these respirators or more, according to Ford.

A nearby plant in Plymouth, Michigan, will produce 3 million face shields, and the company is working with its supplier Joyson Safety Systems to manufacture reusable medical gowns from airbag materials. It's also churning out face masks at its transmission plant in collaboration with the UAW.

In partnership with Dow, privately-held household products company SC Johnson has converted a line at its largest manufacturing facility in Wisconsin to produce 75,000 bottles of hand sanitizer per month. The sanitizer will be donated to frontline and essential workers, including hospital staff, first responders and manufacturing employees, according to the company.

At the end of March, Brooks Brothers transitioned its three U.S. factories from producing shirts and ties to surgical masks and medical gowns for frontline healthcare workers battling COVID-19. The up to 150,000 masks the company plans to make per day are not on par with the N95 respirators used in highly infectious environments. But the company is working with the U.S. Food and Drug Administration to expedite the process to have them approved as surgical-grade masks, CEO Claudio Del Vecchio told CNBC's "Squawk on the Street."

In late March, Hanesbrands joined with the U.S. Department of Health and Human Services and seven other clothing companies to produce so-called “HHS-certified” masks. The company aims to produce up to 75 million masks made from the same three-ply jersey cotton used in T-shirts, and the coalition may collectively produce over 300 million masks, a Hanesbrands representative told Fast Company. 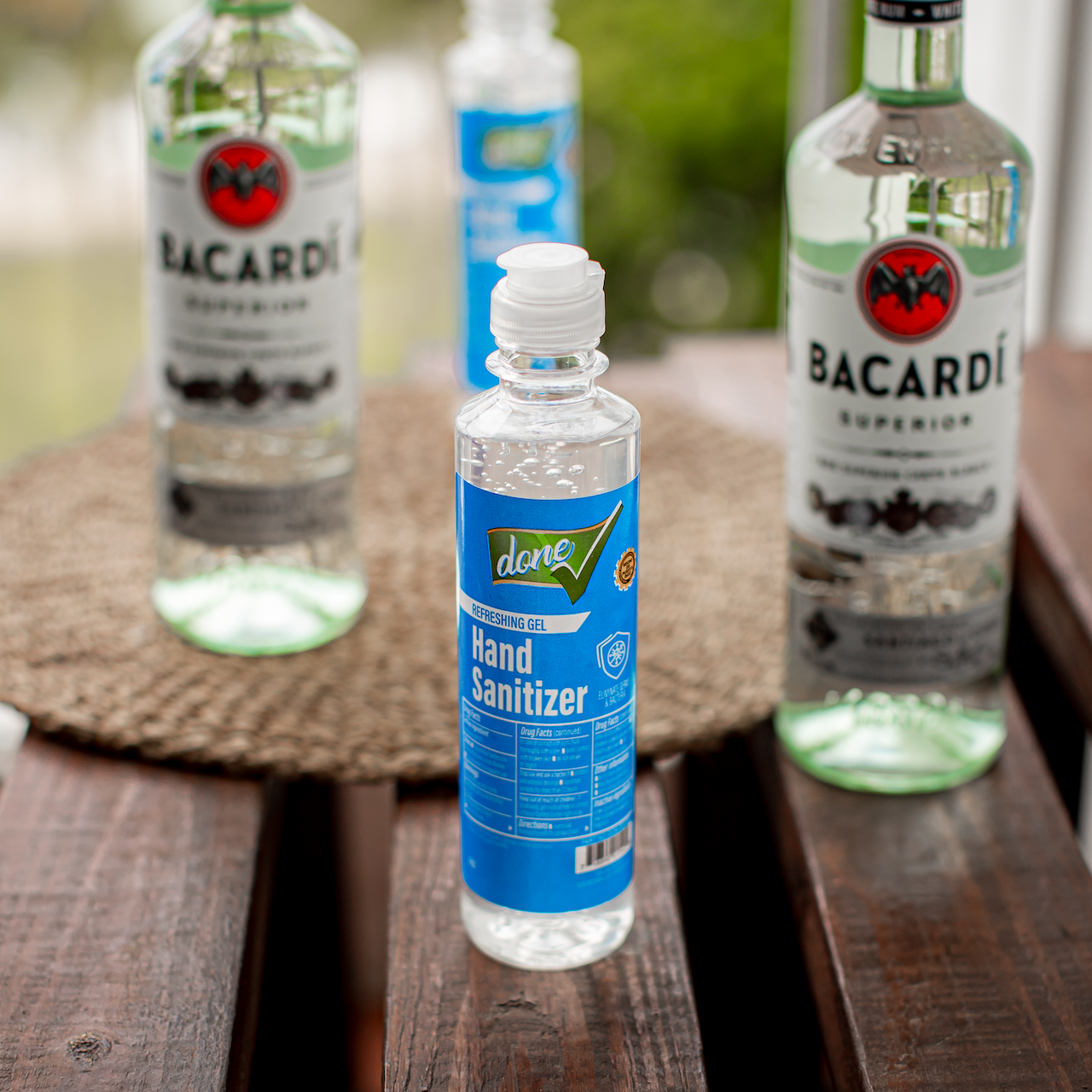 Bacardi is shifting operations at eight of its distilleries in the continental U.S., Puerto Rico, Mexico, France, England, Italy and Scotland to make the ethanol needed to manufacture hand sanitizer. Factories producing Bacardi brands like Grey Goose vodka and Bombay gin will provide enough ethanol for more than 260,000 gallons of hand sanitizer for donation to communities in need, as well as first responders and essential workers, the company said.

In mid March, General Motors partnered with Ventec to retool its Kokomo, Indiana, plant to produce ventilators, which are needed for patients who are seriously ill from COVID-19, the disease caused by the coronavirus. GM shipped a total of 600 ventilators during the month of April, and it expects to fulfill the federal government's 30,000 ventilator order by the end of August, CNN reported. The first round headed to hospitals in Chicago and Gary, Indiana, two weeks ago.

The automaker also claims to have converted its Warren, Michigan, facility to produce face masks in less than seven days. The plant now has the capacity to churn out an estimated 1.5 million masks a month, according to the company — and it shared the fast-turnaround production plans with the Michigan Manufacturers Association, made up of nearly 1,700 companies, to expand mask production across the state. 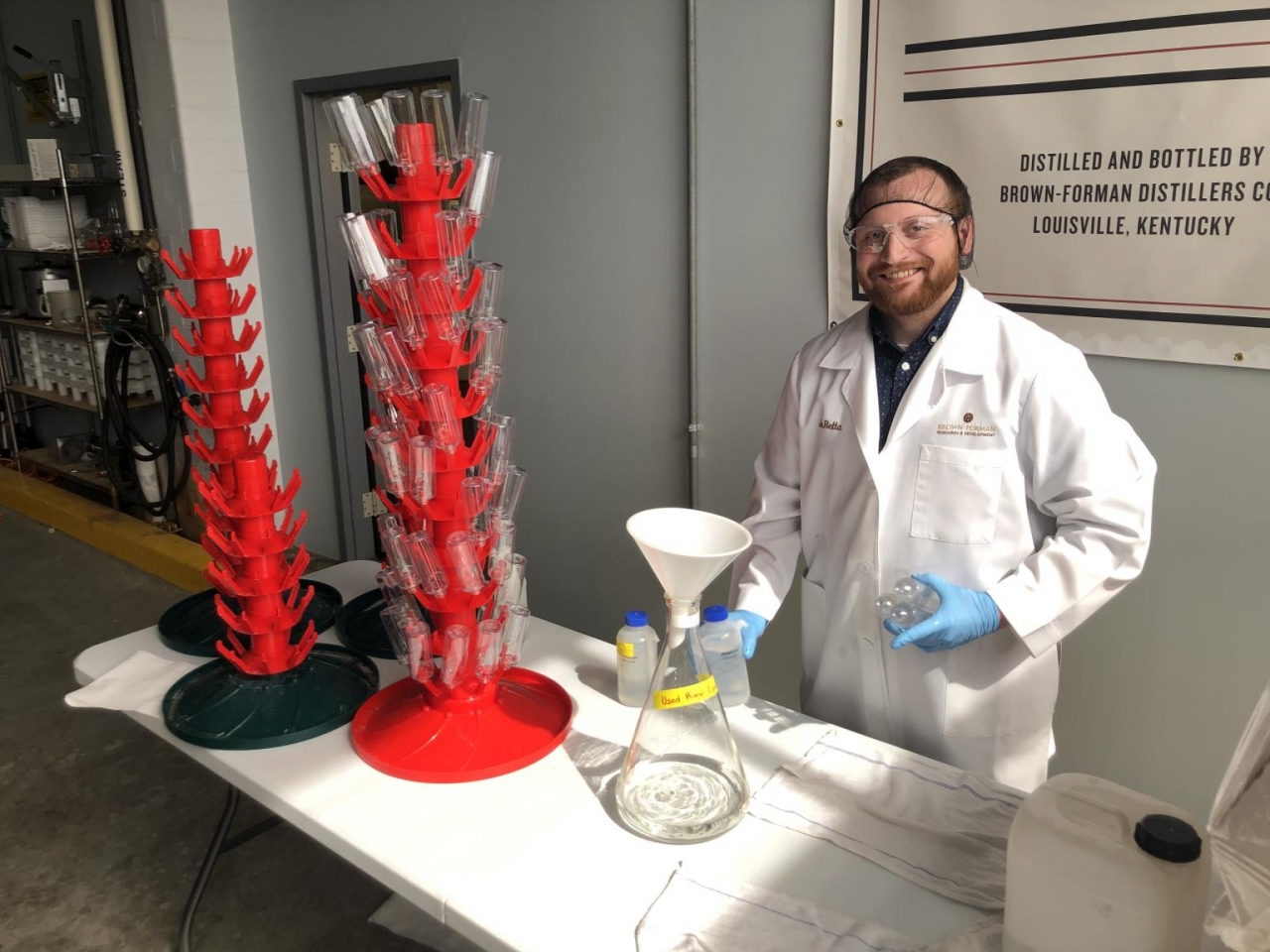 (Image: Brown-Forman's R&D department created their own hand sanitizer recipe and put it into production.)

The research and development team at spirits company Brown-Forman created their own hand sanitizer recipe and put it into production. The company's manufacturing workers will use it to help keep them safe, and the rest will be donated to first responders and healthcare workers in the communities surrounding its Jack Daniel's distillery in Louisville, Kentucky.

In mid March, luxury goods conglomerate LVMH — which includes brands like Christian Dior and Givenchy — switched production lines from perfume and cosmetics to hand sanitizers. It sent the resulting product to French health authorities and hospitals, being one of the first major companies to do this. 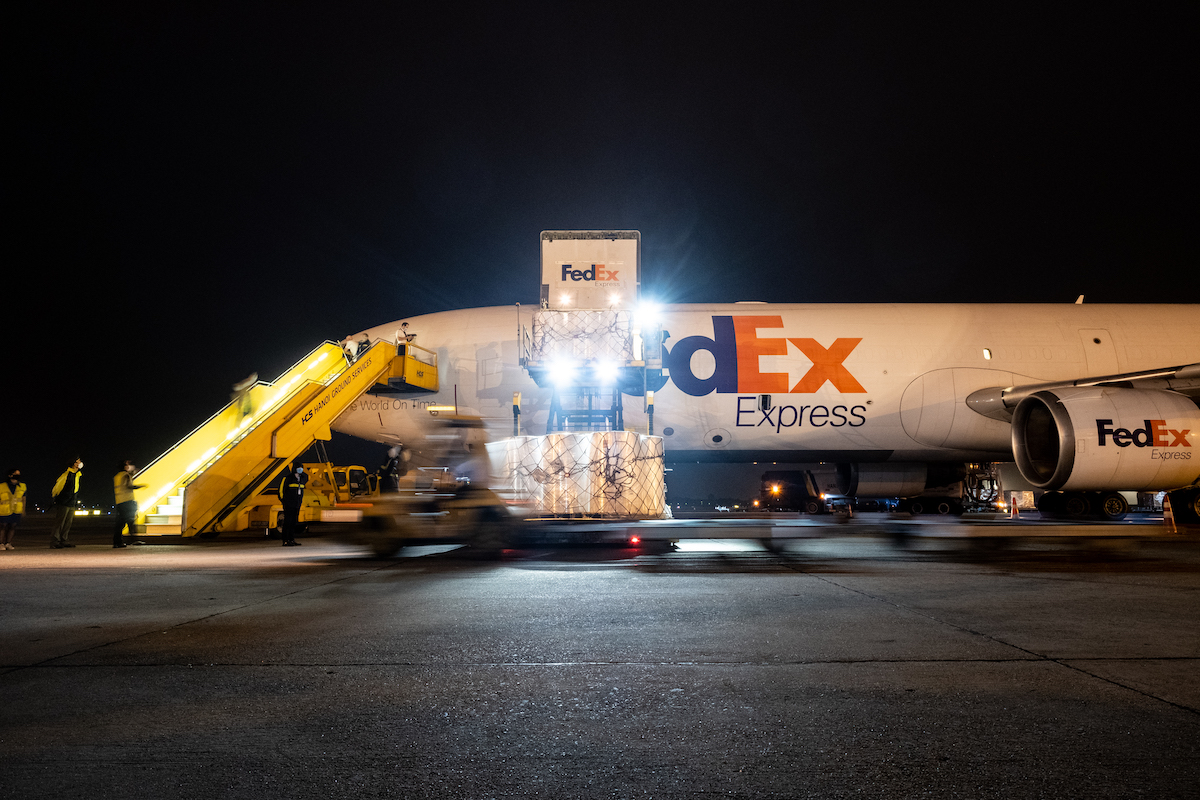 FedEx used its air shipping network to transport more than 450,000 protective suits and 7 million face masks, along with other critical healthcare supplies, to the U.S. over the past two weeks. The logistics giant is looking to ship more than 500,000 suits per week over the next month in partnership with DuPont. Additional mask and supply shipments are also expected through another partnership with healthcare supplies company Medline Industries.

At the epicenter of the coronavirus in Europe, the Italian government asked medical equipment company Siare Engineering to triple its monthly production of ventilators to cope with hospital demand. With help from Ferrari and its parent company Exor, Fiat Chrysler is now making key ventilator parts at its plant in northern Italy to help Siare answer the call. The first round started coming off the lines on April 3.